Barcelona Day 7: Vettel ends his testing on a high 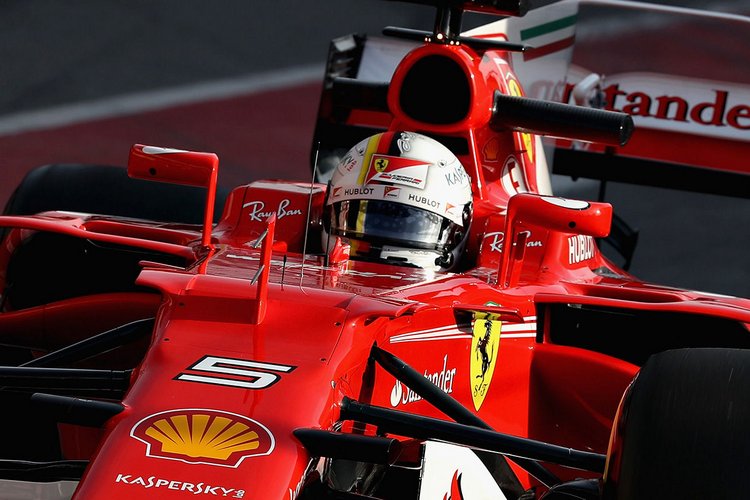 Sebastian Vettel ended the penultimate day of pre-season Formula One testing by setting the fastest time of the seven days completed so far in Barcelona.

Yesterday, Mercedes Valtteri Bottas had set an impressive benchmark of 1:19.310 on supersoft tyres, but this morning Vettel smashed past that marker by almost three tenths of a second, using the Pirelli’s ultrasoft tyre compound.

Vettel might have gone even faster on his way to P1 but the German backed off in the final sector, somewhat masking what the new Ferrari is capable of.

“Reports indicate that #Seb5 backed off: could he have set a 1:18s time? The fun and games have well and truly started!” tyre manufacturer Pirelli reported on Twitter.

Second place went to Mercedes’ Lewis Hamilton who finished just over three tenths adrift of the four-time champion. The Briton also used the ultrasofts to set his best time.

Hamilton handed over driver duties to Bottas in the afternoon and following the Briton’s 52 laps in the morning, the Finn added another 95 to the team’s tally with longer stints later in the day.

Esteban Ocon gave Force India cause for optimism with the day’s third best time, again set on ultrasoft tyres. The Frenchman set a best time of 1:20.161 and posted the second largest lap total, getting through 137 laps of the Circuit de Barcelona-Catalunya.

The Force India driver ended the day 0.255 ahead of Toro Rosso’s Daniil Kvyat. After bringing out the red flags midway through the morning session, the Russian enjoyed a decent afternoon and ended the day with a lap total of 94. Kvyat’s best time was set on supersoft tyres.

US team Haas F1 also had a good outing, with new recruit Kevin Magnussen looking competitive in fifth place with a best time of 1:20.504 set on supersoft tyres.

Sixth place went to Red Bull Racing’s Daniel Ricciardo. The Australian got through a race simulation in the afternoon but afterwards was cautious about his team’s pace in the run-up to the season-opening Australian Grand Prix.

“The race sim was OK. I don’t think we were going particularly fast, but it was good for me to get the laps in, to put myself through it physically,” he said.

“In terms of our performance, I would say on day one of this week’s test we looked competitive, within a couple of tenths, but today it was maybe a little more. I do think our true pace is closer though.”

“We have a bit to learn still, but I think Melbourne will be another story and I think we’ll see a bit more on both the power and aero side. I think we’ll be competitive,” added Ricciardo.

McLaren’s Stoffel Vandoorne took seventh place, though the Belgian twice brought out the red flags in the morning as his car was hit by electrical problems. He managed just 48 laps in total.

With Bottas eighth fastest, ninth place went to Sauber’s Pascal Wehrlein, with the top 10 being rounded out by Renault’s Jolyon Palmer. It was another tricky day for Renault, however, as the Briton’s car ground to a halt in the afternoon following an earlier engine change.

Behind Palmer on the timesheet were Sauber’s Marcus Ericsson and the Williams pair of Felipe Massa and Lance Stroll.