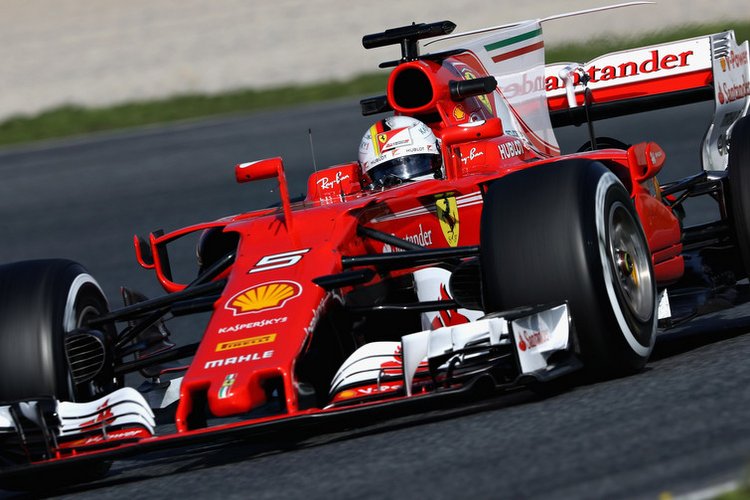 Ferrari driver Sebastian Vettel came out on top in what was probably the first real shoot-out of the season out against Mercedes, as the German bolted on a set of Pirelli Ultra Soft tyres, for the first time in Barcelona, and blitzed around the Circuit de Catalunya to end the seventh morning of testing at the top of the timing sheets.

Vettel’s best time of 0.328 of a second faster than Lewis Hamilton who also had a set of Ultras on his Mercedes. Another indication that Ferrari have indeed closed the gap to Mercedes during the winter.

Hamilton started the morning like he meant business, setting his fastest laps of the preseason testing so far, before Vettel and Ferrari decided to give it full throttle. The German pushing Hamilton off the top of the timing screens with a best lap time 1:19.341 on Softs.

Then to show that they really meant business, they stuck on a set of Ultra Softs for the first time this year. Vettel immediately obliged with the top time in testing so far this season, and it may have even been faster had he not lifted off as he approached the timing beam on the main straight.

Hamilton took the bait and bolted on a set of Ultras, shortly before the lunch break, but fell short on his flyer which was not helped by a red flag situation when it mattered.

Perhaps it is too soon to make much of the flurry of hot laps between the pace setters, but it does set the scene for an intriguing lead-up to the season opener in Melbourne at the end of the month.

There were two red flag stoppages on the day, both caused by Stoffel Vandoorne in the McLaren.

Early on there appeared to be some relief in the team garage as Vandoorne enjoyed a series of trouble free runs, clocking the MCL32’s best lap time of the preseason with a 1:21.348 on Ultra Soft tyres before the gremlins returned.

Force India driver Esteban Ocon continued to impress, setting the third fastest time using Ultra Softs during his 51 laps in the morning, with Daniil Kvyat fourth fastest in the Toro Rosso and Daniel Ricciardo fifth in the Red Bull.

Marcus Ericsson did the most laps, 88 in total and setting the ninth fastest time, while Williams rookie Lance Stroll added 85 incident free laps to his tally.