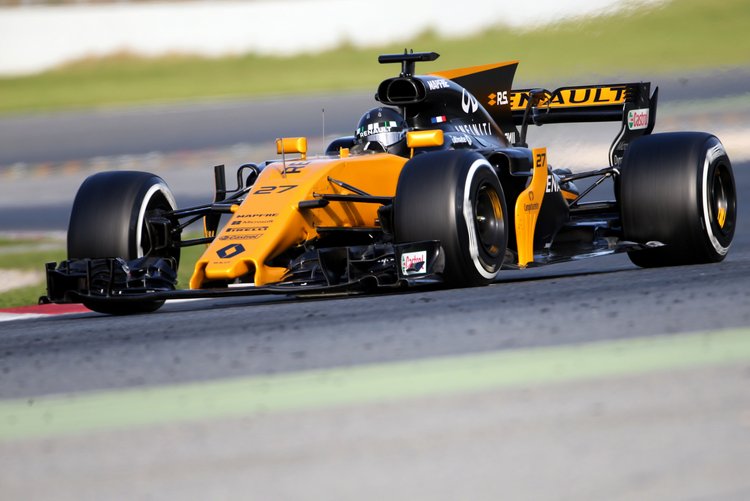 Renault Sport Formula One Team commenced the second week of pre-season testing with both Jolyon Palmer and Nico Hülkenberg taking to the wheel of the R.S.17 at the Circuit de Barcelona-Catalunya.

Jolyon drove first, however his planned running was curtained after 15 laps due to a precautionary power unit change. Nico returned to the car for the afternoon and completed a reliable 58 laps, setting the seventh best lap time of the day, a 1:21.589secs.

Jolyon Palmer: “Today I had a short morning before we had to stop for a precautionary power unit change. It wasn’t ideal but it’s certainly a long way from being the end of the world. We’re still in a good position and I feel confident for the season ahead. For sure, it would be nice to get some more laps and you never want to lose track time. We have another three days left of this test and I’m looking forward to getting some more laps on the board.”

Nico Hülkenberg: “I had a decent run and we were able to complete a pretty much full afternoon programme today. Certainly, you could feel that it was quite windy at times out there and that does affect the feel of the car. We gained some further understanding of set-up and tyres and have plenty to consider before we head out again tomorrow.”

Bob Bell, Chief Technical Officer: “Overall, a useful day where we completed most of the tests we wanted to, despite running for fewer laps than originally planned. We did start with a disappointing morning for Jolyon, whose day was disrupted by a precautionary power unit change. This gave way to a more positive afternoon for Nico, especially with respectable pace shown on the soft compound tyres. Today was another solid step and we’re looking forward to making more progress tomorrow.”