Barcelona Day 5: Massa tops and does most mileage 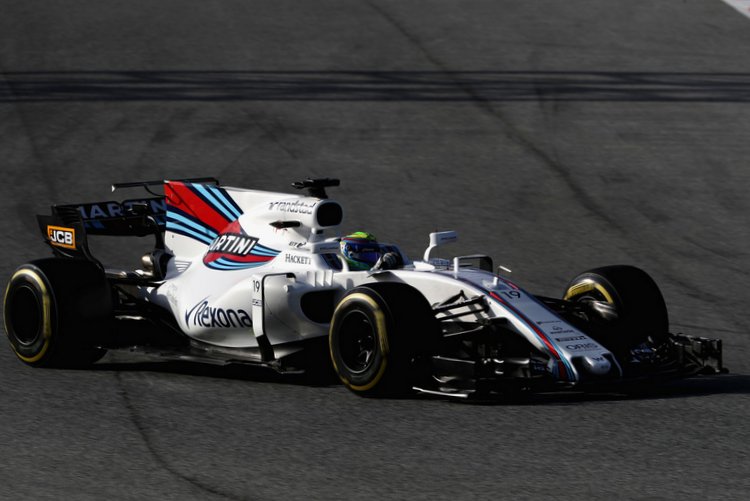 Williams’ Felipe Massa surprisingly topped the timesheets at the end of the first day of Formula 1’s second pre-season test in Barcelona on Tuesday.

Massa posted the second fastest time in five days of testing so far in 1:19.726 and did a mammoth 168 laps on the day, equivalent to close on three grand prix race distances. The Brazilian set his best time using Pirelli Super Soft tyres.

Massa’s lap was just a tad slower than Valtteri Bottas’ fastest time from last week, when he clocked 1:19.705 with Mercedes.

“Very good day for us,” Massa tweeted, adding that it was “not bad” for an old and former retired driver.

Red Bull’s promise to up their speed from last week’s first test was also fulfilled as Daniel Ricciardo recorded the second fastest lap, albeit with Ultra Softs bolted on to his RB13.

Lewis Hamilton and Valtteri Bottas shared duties in the Mercedes W08, with Hamilton completing 49 laps in the morning session and the Finn racking up 86 laps in the afternoon. The pair ended the day forth and fifth quickest respectively. Both used Softs to set their fast laps.

Sebastian Vettel kept a lid on the promising pace showed by the new Ferrari last week, as he remained on slower medium tyres in posting the fourth fastest time and 168 laps on his chart

Esteban Ocon had a good day in the Force India with 142 laps to his credit and the sixth fastest lap of the day, on Super Softs, albeit over a second and a half down on the top time.

Renault also opted to split their drivers with Jolyon Palmer doing the morning work, but was hampered by an engine sensor issue that curtailed his track action to 15 laps and the slowest lap time of the day.

In the afternoon Nico Hulkenberg, with a fresh power unit bolted to the back of the RS17 managed 57 laps and the seventh best time.

At the other end of the paddock, McLaren’s troubles continued as Belgian rookie Stoffel Vandoorne could only register 34 laps before more problems with the team’s Honda engine halted his morning session early. He nevertheless managed to complete 80 laps by the time the day ended, but nearlt three seconds of Massa’s best.

Sauber ‘new boy’ Pascal Wherlein got his first taste of 2017 Formula 1, after missing the first test due to injury, completing 47 laps with his new team and ending 11th fastest.

The German shared the cockpit with Marcus Ericsson who did 53 laps and ended up twelfth.

All but three drivers – Massa, Ricciardo and Ocon – opted to use the Pirelli Soft tyres.