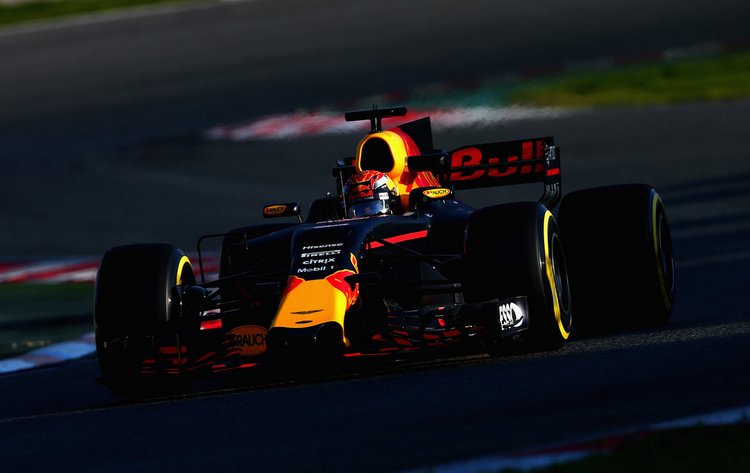 The final day of the first test in Barcelona marked a departure from the past three days’ activity, with the track being made wet in order to conduct testing of Pirelli’s intermediate and full wet 2017 tyres.

Max Verstappen took over driving duties from Daniel Ricciardo and after testing both wet weather compounds, the Dutchman also got in some dry running on the soft compound tyre to record the day’s second fastest time with a lap of 1:21.769.

Looking back on his day’s work, and his time in the RB13 over the course of this first test, Max said: “It’s always good to run a little bit in the wet in the first week of testing. Of course, the conditions are not ideal, as the sun is shining and the track is wet, but at least we got a first idea of what the wet tyres are like.”

“In terms of the week as a whole, the most important thing for us was to make mileage and to know that all the parts were holding up. In general everything behaved pretty well.”

“I think Mercedes might still have an advantage on us in terms of power at the beginning of the season but we’ll be catching up. For sure the car will change quite a bit before we get to Melbourne, as it will for everyone.”

Head of Race Engineering Guillaume Rocquelin added: “While I don’t imagine anyone would say the conditions today were perfect, as some parts of the track were dry and others wet, it was still a very interesting exercise.”

“We’re discovering new things all the time about the tyres and how they interact with the car – warm-up, degradation levels etc – so we did find out some things we wouldn’t have unless we had been through this process.”

“Like everybody, we did most of our wet running in the morning and then later on we had the chance to get in a bit more work on slicks, which was useful. We chose not to run when the track was damp as there wasn’t really much point and we thought we might also have a recurrence of yesterday’s exhaust problem, though that turned out not to be the case.”

“In all, it was a good test. Yes, we had a few problems, which cost us some track time, but the fundamentals are good: car control is good, the balance is good, the feel is good. That’s a good platform for next week when we’ll get into race simulations and working on the best set-up for the car. For now, though, it’s back to the factory for a pretty intense weekend of homework.”