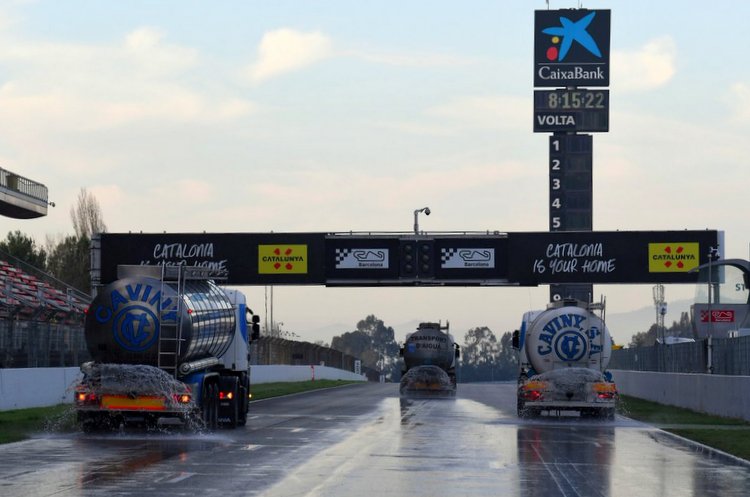 Despite sunny clear skies over Circuit de Catalunya, the track surface has been sprayed and drenched with water to simulate wet conditions for the fourth day of Formula 1 pre-season testing in Barcelona.

Pirelli racing manager director Mario Isola explained, “The plan is confirmed. We wet the circuit initially overnight, to keep it damp, and again in the morning. There is no sprinkler system, so we are using eight water tanks together with the circuit.”

“We want to go through all the conditions, from extreme wet to intermediate to dry in the afternoon. This is useful to the teams to assess the crossover [between tyres] – it’s important for them to define that crossover.”

“The tyres are different [this year], so the numbers are not the same, and we believe it is important to give them this opportunity to assess this.”

Where did all that water come from…? #F1 #F1Testing pic.twitter.com/VXLCJcJBx2

Isola pointed out that the displacement of the new wet-weather Pirelli tyres has increased, “I don’t have a number, but [the displacement] is much more than last year of course because of the dimensions of the tyre.”

“If you compare the tread pattern [to 2016] it looks similar, but in reality you have more rows, wider rows, to evacuate more water.

“We will also see what happens with the visibility, because of course we will spray a lot more water. But this is a different issue.”

The first stanza of Formula 1 pre-season testing ends today [Thursday] with the second four day chapter starting on Tuesday, 7 March, and with run for another four days again in Barcelona.