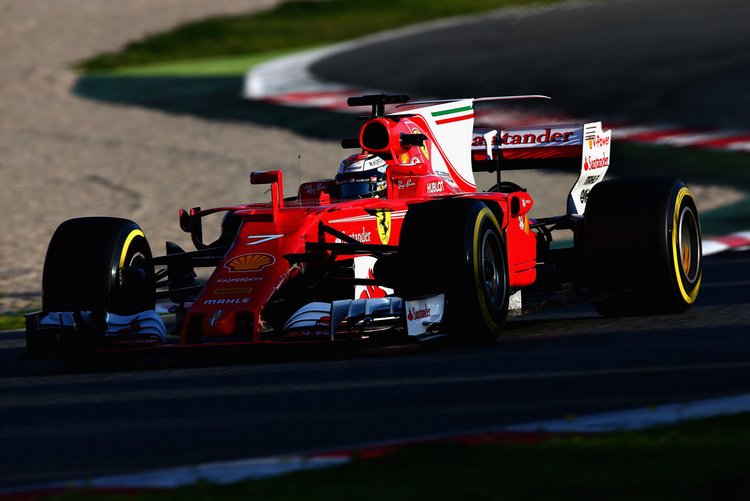 Ferrari ended the fourth and final day of the first Formula 1 test of the season at Circuit de Catalunya in Barcelona, with Kimi Raikkonen topping the timing screens while Mercedes endured their worst day so far.

The morning started with an artificially wet track under clear and sunny skies, as Pirelli requested an opportunity to test their wet tyres. Report here>>>

Raikkonen’s best time 1:20.872 came when the track was dry. The Ferrari driver completing 93 laps during the course of the day. The Reds will be pleased with their four days in Spain.

After three days of solid running, a chink in the armour of Mercedes appeared for the first time, as an electrical fault on the hitherto bullet proof W08 forced the team to skip the wet session, denying Hamilton a run in the car on the day.

The problem was eventually sorted, allowing Valtteri Bottas to complete 68 laps and setting the eighth fastest time in the process.

Max Verstappen who was quickest in the wet session, ended his testing with the second best time in the Red Bull, albeit nearly a second down on the top time with 85 laps completed.

Renault driver Jolyon Palmer was third fastest with 39 laps set when he took over the car for the afternoon stint. The top three setting their times on the Pirelli soft tyres.

Romain Grosjean racked up 118 laps in the Ferrari powered Haas, more than any driver on the day and ending with the fourth fastest lap time on super softs.

Next up was the Ferrari powered Sauber, with Antonio Giovinazzi on duty in place of injured Pascal Wehrlein. The Italian managed 84 laps on his way to setting the fifth best time.

Earlier Nico Hulkenberg was on duty in the cockpit of the RS17, setting the ninth best time with 51 laps to his credit.

Williams were absent from the final day’s proceedings because their car was deemed beyond repair after Lance Stroll slammed the wall on Wednesday and there were simply no spare parts to repair the damage to the FW40.

Toro Rosso were present but a engine problem scuppered their plans as they were unable to resolve the issue, robbing the team and their driver Daniil Kvyat of valuable track time.