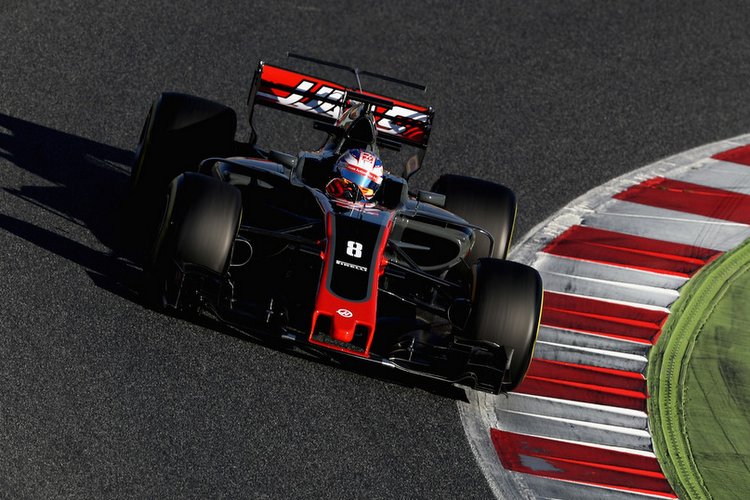 Haas F1 Team had a methodical day of testing Wednesday with Romain Grosjean at the wheel of its VF-17 at Circuit de Barcelona – Catalunya.

The 30-year-old Frenchman collected 56 laps around the 4.655-kilometer (2.892-mile), 16-turn layout as he went through various systems checks in the morning and an array of setup configurations in the afternoon.

Grosjean’s quickest time was a 1:22.118, earned on his 49th lap while riding on a set of Pirelli P Zero Red supersoft tires. It placed him eighth among the 13 drivers taking to the track. Grosjean tallied 260.68 kilometers (161.979 miles) in his first day of testing. Teammate Kevin Magnussen drove the VF-17 Monday and Tuesday.

Grosjean began the morning session with reconnaissance laps on Yellow soft tires before transitioning to White medium tires for some timed laps until the mandatory lunch break. His best run of the morning was a 1:25.133 on his 22nd lap that put him 10th overall.

After logging 27 laps in the morning, Grosjean knocked out 29 laps in the afternoon. He began with White mediums and then switched to Yellow softs before a stint on Red supersofts in the last 15 minutes, which helped produce Grosjean’s quickest time. A brief, three-lap run on a used set of Yellow softs capped the day.

Romain Grosjean: “It hasn’t been an easy day as we had a few issues here and there. We didn’t do as many laps as we planned to. We didn’t complete our program. On the setup, I don’t think we’ve found where we want to be exactly, so there are a few things we need to work around and understand. Generally, these cars are going to be pretty cool to drive – going fast into the high speed, braking late and carrying quite a bit of speed through the corners, which is good. I think Pirelli has made a decent step with the tires, the way you can push three laps in a row. I’m just a bit disappointed we didn’t get more mileage, especially with tomorrow being the planned wet day.”

Guenther Steiner: “Not a perfect day today. We expected more, but again, it’s testing. We need to keep our heads up and try to do better tomorrow. We know that we can do it, and that’s why we’re here to test. We had some various issues and we played a lot with the setup. We had a few electrical problems, with which we lost time. There’s always little gremlins which can cause you to stop for half an hour, an hour, and if that happens the day goes by quickly and you don’t do a lot of running. It can always be worse, and thankful we had a good day yesterday.”