Haas: Very reliable no problems at all 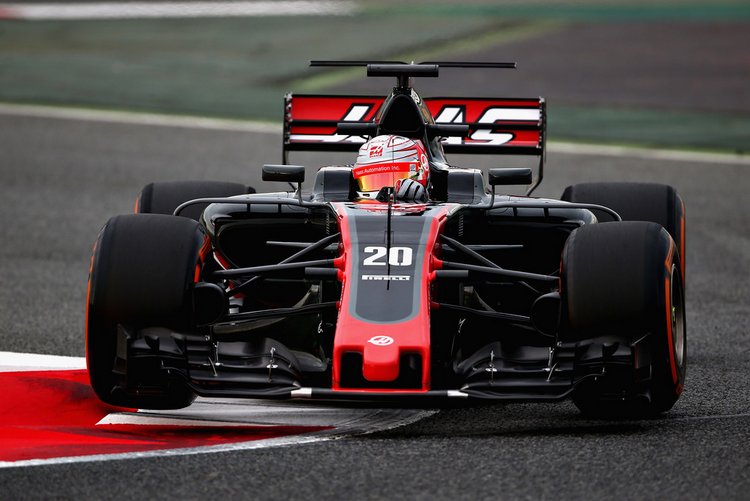 Kevin Magnussen had another productive outing behind the wheel of the Haas VF-17 in the second day of preseason testing Tuesday at Circuit de Barcelona – Catalunya.

In addition to logging the most laps, Magnussen remained fast. He set the fourth-quickest time with a 1:22.204 on his 103rd lap shod on a set of Pirelli P Zero Red supersoft tires.

Magnussen began the morning session with a series of reconnaissance laps, first using the Orange hard tire before optioning between the White medium tire and the Yellow soft. After five laps of systems checks, it was time for some outright running, first with White mediums and then on Yellow softs.

As the clock ticked closer to the mandatory lunch break, Magnussen’s times ticked downward too. His best time in the morning was a 1:23.200, secured with Yellow softs on his 36th and final lap of the session to put him fourth overall.

The afternoon segment saw Haas F1 Team sample nearly all of the tires in Pirelli’s lineup with the Orange hard, White medium, Yellow soft and Red supersoft each getting a workout. Magnussen made the most of the day’s second half, knocking out 82 laps.

The team practiced their pit stops, bolting on four new fresh tires to the Haas VF-17, and sending Magnussen back onto the track. The Red supersofts provided the most grip, and Magnussen unsurprisingly knocked down his quickest time in the day’s final 30 minutes.

Kevin Magnussen: “A good day. I got the most laps of anyone, so that’s sums up our day pretty well, with lots of running. That’s what it’s all about here at winter testing. We want to put as many miles on the car as possible, to find all of these little problems that can creep up during the season, to catch them as early as possible. I’m very happy with the feeling I have in the car and in working with the team. It’s been good to get back in a car again.”

Guenther Steiner: “We have learned a lot from this test and it’s been good so far. We hope it continues like this over the next two days and into next week, as well. Today we ran our full program. This morning we had a small hiccup, nothing big, and in the afternoon we ran our full program. What we missed in the morning we got in the afternoon. We learned a lot about the behavior of the car. We did setup changes. We know that we still need to work on the car to get the best out of it, but that’s why we do testing. Now the guys will analyze the whole night, and tomorrow with Romain (Grosjean), we’ll put in what we learned today and try to make the car go quicker. It seems the car is very reliable. Ferrari has done a fantastic job with their engine package, gearbox, everything. It was very reliable today, no problems at all. Touch wood it stays like this for the rest of the test, but up to now we’re very satisfied.”