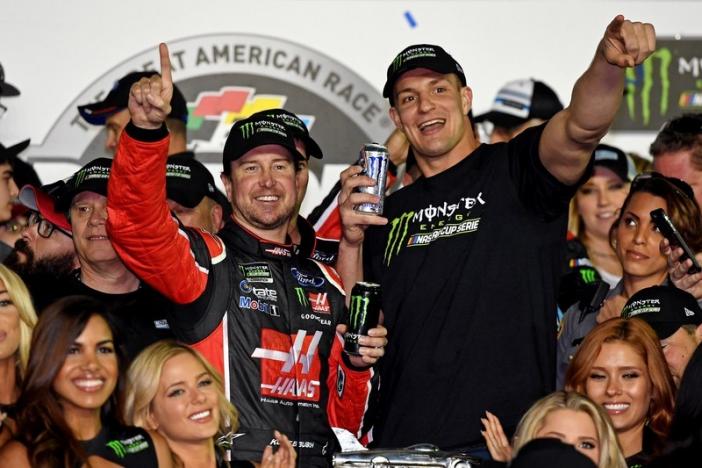 The racing organisation headed by Gene Haas, including the Haas F1 Team, enjoyed success at the Daytona 500 when Kurt Busch survived a demolition race and much like he has throughout a controversial 18-year NASCAR career came away a winner, albeit with a few bumps, scrapes and dents.

Over nearly two decades of driving for some of NASCAR’s top teams the volatile 38-year-old has had nearly as many run-ins on the track as away from the speedway.

Just 25 cars were still running at the end of Sunday’s race and only five reached the finish line without some damage.

Even Busch did not escape unscathed, “Our car was damaged on all sides. We went through everything today.”

Banned from competing in the 2015 Daytona 500 after his then girlfriend Patricia Driscoll made an allegation of domestic abuse, Busch finally made it to Victory Lane, adding the crowning achievement to a resume that has produced 29 victories and a driver’s championship in 2004.

While Busch was never charged, NASCAR’s sanctioning body required him to complete a rehabilitation program before being reinstated.

Team co-owners Gene Haas, who also runs HaasF1 and Tony Stewart, known as hot head in his driving days, stood by Busch and were rewarded for their loyalty with a first Daytona 500 win.

Asked if he was taking a risk Haas joked: “It’s still a gamble. I know he’d been through a bit of transition with Penske. I wasn’t interested in points racing, I was interested in winning.”

Busch’s rise was a bumpy one. In 2005 he was dropped from one of NASCAR’s top outfits the Roush Team (now Roush Fenway) before the penultimate race of the season after being charged with reckless driving.

Already signed to move to another top team Penske Racing in 2006, Roush management said that they would not be apologists for the volatile driver.

Busch’s stint with Penske also ended in controversy in 2011 after the abrasive driver verbally abused a television reporter which was caught on a video and posted on YouTube.

By 2012 Busch, the older brother of 2015 series champion Kyle Busch, had developed a well-earned reputation as driver who brought considerable skill along with plenty of baggage to the job and soon found himself driving for second second-tier teams until Stewart-Haas Racing came calling.

Third-place finisher, A.J. Allmendinger, Busch’s former teammate at Penske who himself had issues at one time said: “He’s a hell of a racecar driver. He’s had ups and downs. It’s just cool to see somebody like that, that puts all the effort into it.”

Haas entered Formula 1 in 2016 and made an impressive debut season – nabbing the Grand Prix 247 Team of the Year 2016 Award – and this year plan to go one better with Romain Grosjean and Kevin Magnussen spearheading their campaign.