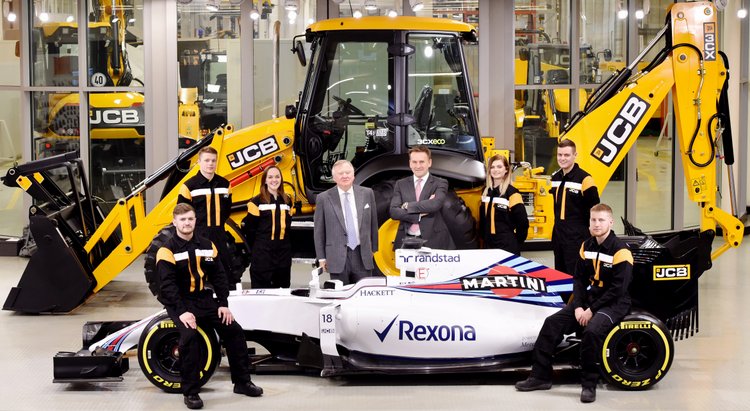 Press Release: Williams Martini Racing and construction equipment manufacturer JCB are proud to announce a new partnership ahead of the 2017 season.

The agreement is one of a number that will be made following the appointment of Lance Stroll, as one of the team’s race drivers this year.

As part of the partnership agreement, JCB branding will appear on the Williams Mercedes FW40 chassis and rear wing end plate from the start of the 2017 season. JCB will also feature on Felipe Massa and Lance Stroll’s race suits and helmets, and from the British Grand Prix onwards, all trackside personnel team kit.

JCB was founded in 1945 in Uttoxeter, Staffordshire. Current Chairman Lord Bamford joined the company in 1964 after completing his engineering apprenticeship and has been at the helm of the business since 1975.

Lord Bamford is passionate about engineering and motorsport and was the inspiration behind the company’s sponsorship of the JCB Trophy Championship for Historic Cars in the early 1970s.

It was also Lord Bamford’s brainchild to attempt a world diesel landspeed record in a car powered by two JCB engines to prove their power and performance credentials. The mission succeeded and the JCB Dieselmax car still holds the world diesel land speed record of 350.052mph, more than a decade after it was set on the Bonneville Salt Flats in Utah, USA.

JCB Chairman Lord Bamford said: “I am an engineer and a manufacturer and designing and engineering innovative products is at the core of what JCB does. We frequently combine our engineering expertise with some of the best automotive technologies which means our machines are very fuel efficient and intuitive to operate. Our partnership with Williams Martini Racing builds on that innovative and technological link and our company’s long association with motorsport.”

Claire Williams, Deputy Team Principal, Williams Martini Racing, added: “We are delighted to welcome JCB to our family of partners. Engineering and innovation are also at the core of everything we do at Williams, which makes this partnership one of shared values and aspirations. As two great British brands, we share a similar drive to continually push boundaries and not rest on our laurels in our desire to be the best. I know this will be a successful partnership for both our brands and I look forward to embarking on this journey with such a prestigious brand as JCB.”