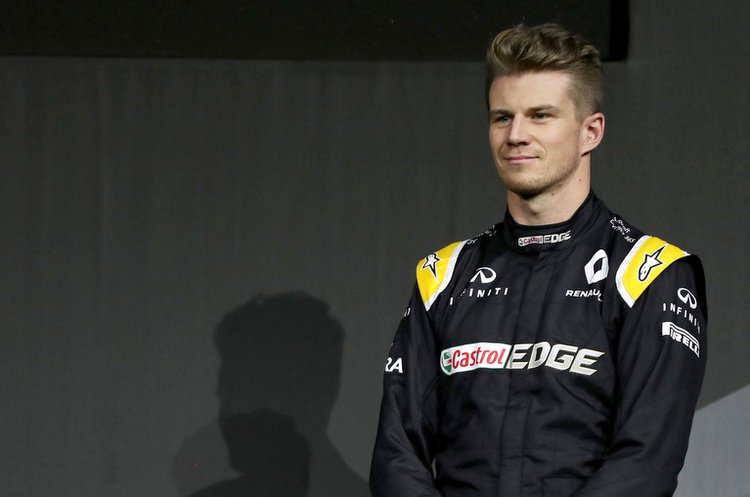 Nico Hulkenberg is fired up for a new start with Renault despite moving from a team – Force India – that comfortably beat his new outfit last year.

“I’m finding it very exciting, and good so far,” the Le Mans 24 Hours winner told Reuters at the launch of the team’s new RS17 car in central London.

Hulkenberg has yet to stand on the Formula One podium, after 115 grand prix starts, but Renault are targeting fifth place overall with the possibility – if all the stars are aligned in a season of change – of a rostrum finish.

The longer-term target, for a team that won titles with Spaniard Fernando Alonso in 2005 and 2006 before pulling out in 2010 and then returning as full constructors last year, is to be challenging for the title again by 2020.

Hulkenberg was wary of raising hopes too high, at least until the car has run for the first time in testing in Spain next week.

“I think everybody’s very optimistic and excited about the year ahead but you also have to be realistic and I think the team still has a lot of catching up to do,” he said. “I’m not a new Nico, (I’m) the same but definitely very motivated and keen and eager.”

The German, who joins Briton Jolyon Palmer in the line-up, said he had already seen a big difference in approach between Force India and Renault, with the latter enjoying far greater resources and investing heavily.

“Hopefully all this pays dividends later in the year but for sure this is still a build-up year, getting to grips with everything,” he said.

“Being in a new team, it always takes some time to acclimatise but so far I feel already pretty integrated, I have to say. They gave me a good, nice, warm welcome.”

Renault Sport F1 managing director made the team’s expectations clear, saying: “You can see that he will be a leader of this team. Not just of the race team, between himself and Jo, but he will be a leader for everyone and a clear ambassador for Renault. We are all looking forward to seeing him in action.”