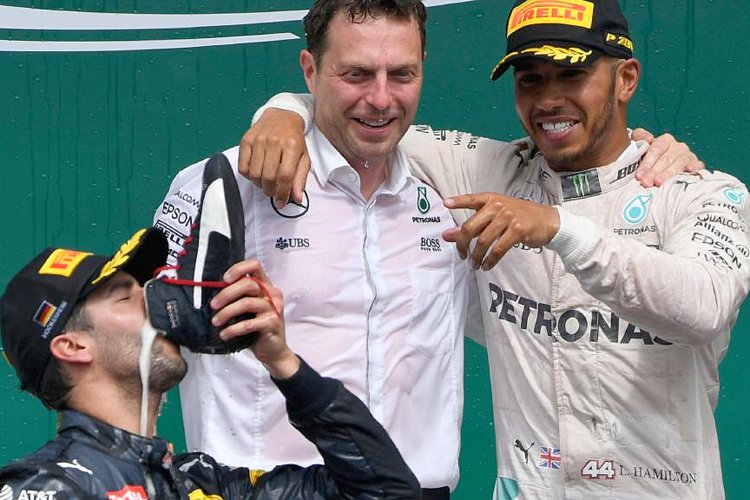 Daniel Ricciardo has turned a Australian bar room and rowdy party tradition – the ‘shoey’ – into a podium celebration which has delighted some and disgusted others, including Lewis Hamilton who says he will not participate in the ritual should the occasion arise in future.

“You don’t understand, we’ve got these shoes and it’s so hot down by our feet [when driving] and we’ve got these hydraulic fluids going down there, they’re running at like 300 hundred degrees or something crazy, so it’s bleeding hot.

“Your feet are drenched afterwards! My dad would always call it ‘toe jam’ – he’s just drinking toe jam,” Hamilton added with a laugh.

Last year Ricciardo explained how the shoey got onto the world stage, “Well, as far as I know I started it in F1 but not worldwide. It was a few loose Aussies, from what I saw, the Mad Hueys — they’re surfies and fisherman and just loose guys.”

“They travel the world fishing, surfing and whatever and they like to drink a bit of beer and whatnot, and that’s where the shoey began.”

“On their travels they’d get people to do it as well and it’s just a bit of a laugh. I know Jack Miller [MotoGP rider] knows a few of the guys from the Mad Hueys, so when he got his win in Assen.:”

“I suspected he was going to do it, and he did, so I thought I’d keep the Australian tradition going,” added Ricciardo.