McLaren raises the bar in team information for fans 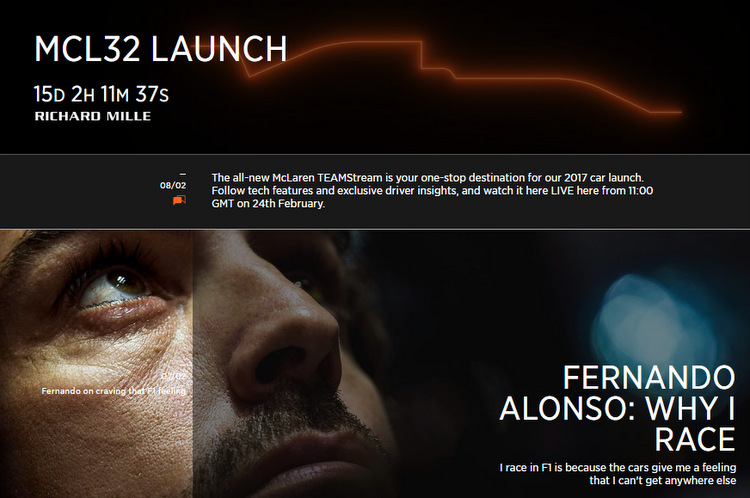 McLaren have raised the bar in their efforts to engage with fans by launching TEAMStream – an interactive portal for all the team’s activities.

In a press release the team described their new venture as “a dynamic, ever-changing online feed, one that’s continually being updated with a stream of new, modular content.”

“TEAMStream reflects the relentless yet variable pace of a grand prix season, immersing fans into the heart of the team with a series of updates, stories and rich media and social integration, all accessible within a single feed. Uniquely, it provides the opportunity for McLaren to build the experience together with its fans and partners.”

McLaren Technology Group Executive Director, Zak Brown, said, “At McLaren, we’re all about putting our fans first, and I’m enormously proud that we’ve redesigned our website with an approach that puts our fans front and centre.

“The essence of Formula 1 across digital and social media is the constant delivery of information and entertainment, so the introduction of TEAMStream is particularly timely, and will really resonate with our fans, who are constantly monitoring our feeds for updates and info.

“For our partners, it offers the opportunity to provide deeper and more engaging content. And all of this comes without any let-up in the content that’s made our website the benchmark of the sport – superbly written features, columns and blogs, and incredible photographic and video content.”

McLaren Group Head of Digital & Social Media, Rob Bloom, added, “McLaren’s digital engagement strategy focuses on bridging the proximity gap between the team and our fans – and TEAMStream marks a further step towards enhancing that connection.

“Working with our agency, Havas London, we’ve developed a platform that enables McLaren, our fans and our partners to celebrate the moments that make up a Formula 1 season, creating the richest and most engaging online experience on the Formula 1 grid.

“In turn, we’re opening up new opportunities in the commercial market place. McLaren was the first Formula 1 team to launch a responsive site back in 2013, and we were also the first to launch a mobile app which curated all stories around the brand.”

“We’re now the first Formula 1 team to completely repackage our online experience for fans, with a mobile-first philosophy at the core, and more exciting initiatives to follow during 2017. Once again, we believe TEAMStream puts McLaren ahead of the competition in the digital marketplace.”

The site is live now and at first glance appears slick and informative as well as a seemingly good resource for media to obtain background information. It will be interesting to see how it evolves and is made use of during Grand Prix weekends.

TEAMStream certainly raises the bar on how information is disseminated by Formula 1 teams in future, easy to use on all modern platforms without being too fancy or resource intensive.