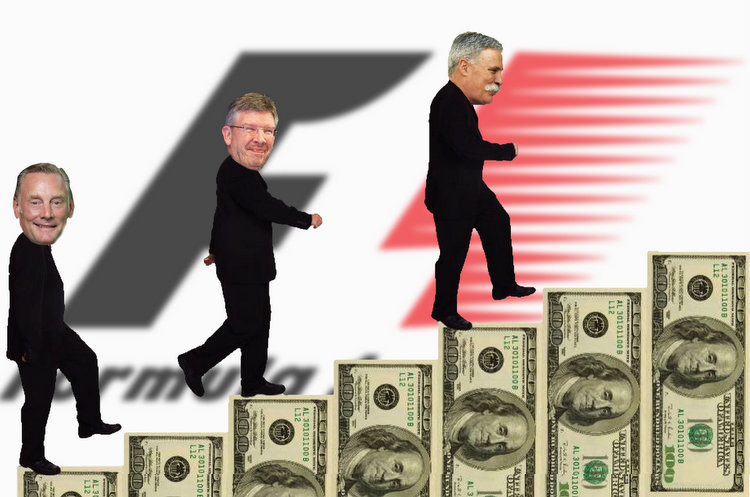 One of my business rules. Seems simple, but with it you identify customers, suppliers, and added value of any company. Very powerful.

In F1 it’s all about the money. Mr Bernie Ecclestone became a billionaire through F1, and according to Ken Tyrrell, by selling something he never owned in the first place! Every year the top teams spend hundreds of millions, of any currency you like, just to participate in F1, never mind win. F1 is a global apex sport.

Liberty has just taken over from CVC. According to Forbes, Liberty has paid $ 4.4bn for F1, with about 75% of that being shares in Liberty themselves and $351-million in loans. Although CVC have made $4.4-billion through dividends, their stake in F1 is only going to return them $354-million.

All that’s important here is that Liberty didn’t turn up with a huge pot of cash, but instead convinced CVC to swap their ownership of F1 with part ownership of Liberty. Yes, I know, it’s all confusing!

So Liberty doesn’t have the money to buy F1? Not according to Forbes. Remember they still need to find $ 1.1bn in cash – that 25% of the purchase price. They’re selling “debentures” and raising funds through loans, but this is where the F1 teams come in.

Any team can spend up to $200-million buying in to F1 to secure their future, but does it? Not according to Eurosport that states F1 teams will not be given voting rights. They’d have no say in how prize money was distributed, marketing, or any other strategy, or even the appointment to the board of senior officials. It’s very much that Liberty is asking for silent partners from F1 teams – they just want their money!

Two thirds of the profits are already converted in to prize money for the teams, and buying a tiny stake just to get extra dividends just doesn’t seem worthwhile. If F1 can raise its value over the coming years then the share may be worth selling later, but Eurosport state they’ve actually fallen since Liberty took over.

We’ve seen with other companies how they can avoid paying tax by charging subsidiaries for a royalty fee to use their image. It’s how Starbucks works around the world. With Liberty they seem to have a hand in so many companies they could easily then disassemble F1 such that F1 is then paying separate companies, owned by Liberty, for use of new technologies such as social media streaming. This could easily bleed away profits from F1, helping avoid tax, but also denying those with shares any meaningful dividend.

Is buying in to F1 worth it for the teams? Follow the money! F1 fans pay for F1 either by attending races, watching on TV or listening on the radio. Race attendances are down. Any reports you hear about TV ratings they’re down. F1 is moving behind a pay-wall, further denying sponsors the exposure they require. Unless Liberty can reverse this trend, it certainly isn’t worthwhile.

But the teams don’t realise the power they have either. They’ve always been threats of setting up another breakaway series. If Liberty doesn’t perform, teams might just take ownership of their own destiny leaving Liberty with 100% of nothing.