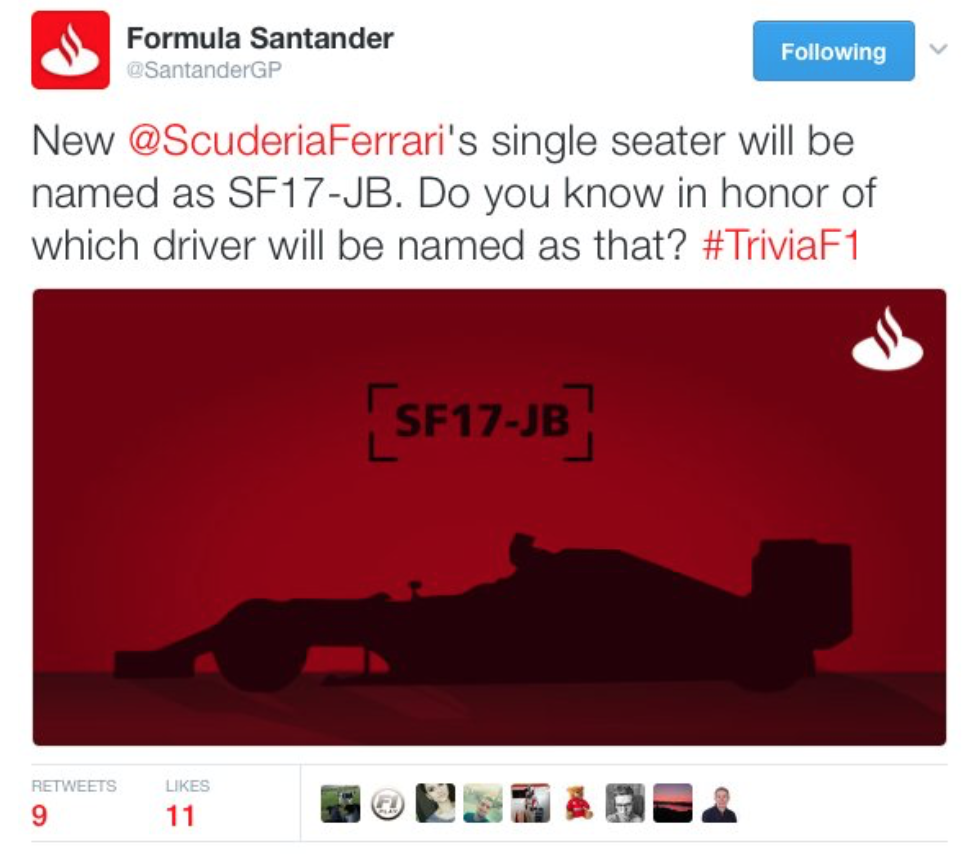 Ferrari sponsor Santander jumped the gun and revealed the designation of the Italian team’s 2017 challenger through, what turned out to be, an ill timed tweet.

Santander revealed the designation SF17-JB and hinted that the name was in honour of the late Jules Bianchi who raced with the number 17 in Formula 1, before his death due to injuries he suffered during the 2014 Japanese Grand Prix.

Bianchi was part of the Ferrari Drivers Academy, the popular and highly rated Frenchman being groomed by the Maranello outfit for their senior team. They bankrolled his drive with Marussia.

Before the Santander tweet, in early January, F1 fans launched an online petition on change.org requesting Ferrari to name their 2017 car after Bianchi. Petition here>>>

The petition reads: “We would like that the new  F1 car for 2017  Ferrari named  in tribute to Jules Bianchi.
Ferrari SF17-JB   He  deserve it  With His big heart and talent he left un unforgettable memories in all the F1 fans heart and soul!”

“It could mean everything for the family Bianchi and for the all fans of the world, for the society, for the talented children that gives hope that they can achieve their goal as Jules did, if they see the new 2017 F1 Ferrari car as many as they see it its means  their is hope for everybody if work for his, her dream to come true.”

“Jules name we would like to remember forever deeply in people mind if they see his name on the car. He was an individual who was blessed with talent and perhaps this is the reason why he had the opportunity to drive the world’s most famous racing car Ferrari. “

“He was an icon. People idealized him and appreciated him for his pure talent. His name will never be forgotten and he will always be remembered in the world”

“Although he is no longer with us, it is comforting to know that his passion for racing will live on through charitable works, his reputation, and the memories we have of him You will be forever missed Jules!”

However Ferrari, who were asked for comment by La Gazetta dello Sport, denied that the car will be designated SF17-JB.

The Italian team, with drivers Sebastian Vettel and Kimi Raikkonen, will unveil their 2017 car at Maranello on 24 February 24, the same day as McLaren.

Santander have subsequently removed the tweet from their feed and replaced it with this:

We were going way too fast! The name of the 2017 Ferrari car isn’t official yet. We’re sorry, but we all have to wait for it. 🙄 pic.twitter.com/q2iOzhA5l2