Ricciardo: Absolutely I can beat Hamilton 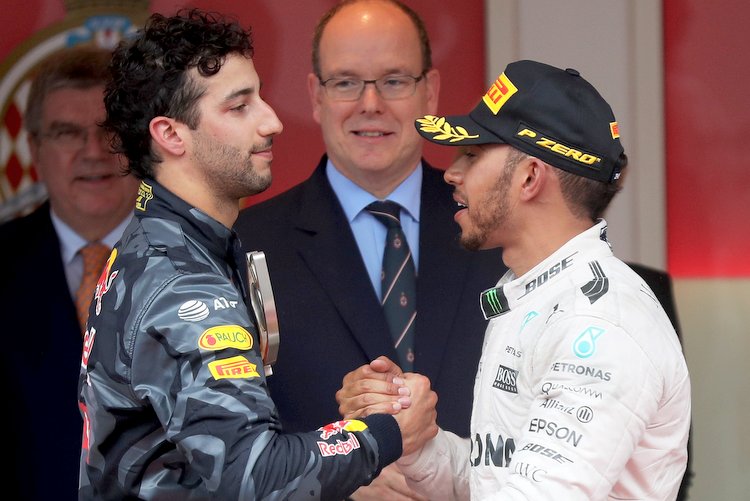 Red Bull driver Daniel Ricciardo makes no secret of his admiration of Lewis Hamilton, acknowledging that the triple Formula 1 World Champion is one of the best there is, but at the same time believes he can beat the Mercedes driver.

Asked by The Age if he can he beat Hamilton in an evenly matched contest, Ricciardo was adamant, “Absolutely. It’s something that I’ve been asked a few times – who would you love as a teammate and all that – and Lewis was one that I was always saying.”

“Obviously I think that he is massively talented and I think we would have a good fight, and, yeah, I’d have confidence that I could get the job done.”

This season Hamilton paid Ricciardo a great compliment on the podium at Monaco when he said that the big smiling Aussie was “one of the best drivers I’ve raced against and \ I’m looking forward to many more battles with him.”

Ricciardo appreciated the plaudit, but at the same time is somewhat bemused by his relationship with Hamilton, “It’s a tough one. He’s never had anything bad to say about me. He’s always been nice to me, but sure he has days where he likes to keep to himself.”

“Some days we’ll chat and other days we won’t and that’s just that. But at the same time, it’s, sure I’ve made a few friends in the sport, but it’s not our primary purpose of being here so I’m not expecting him to call me and he’s not expecting the same from me.”

“It’s just how it is, he’s got his own things going on… he’s sort of doing his thing really,” added Ricciardo.

The man who Ricciardo replaced at Red Bull, Mark Webber believes his fellow Australian will be a contender in 2017, “Daniel was probably the most consistent driver in the field [in 2016] and he’s absolutely world class, in that top three drivers.”

“He’s in a position to go again and certainly vie for the championship if Red Bull can get the car together because Nico is virtually impossible to replace in the short term at Mercedes,” predicted Webber.