Arrivabene: We will do our utmost not to disappoint you 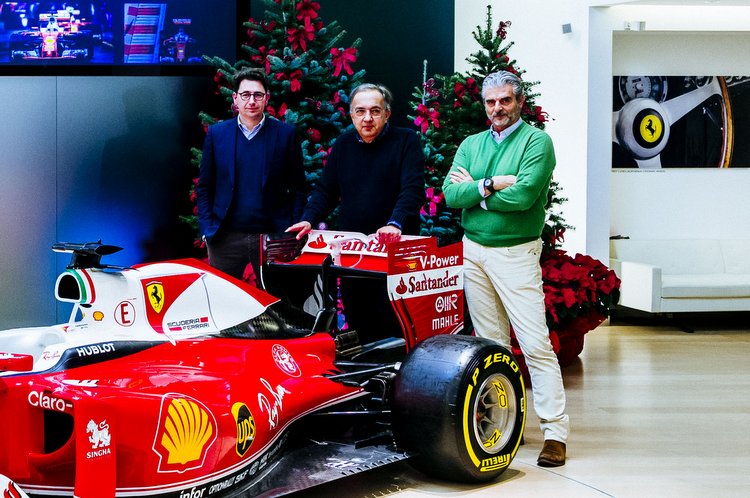 There were lashings of humble pie served at the annual Christmas function for media hosted by Ferrari, with Ferrari president Sergio Marchionne admitting his foolishness when early in the season he predicted his team would challenge Mercedes (report here>>>) and team principal Maurizio Arrivabene thanking fans for their patience.

Speaking during the function at Maranello, Arrivabene addressed the tifosi directly, “You have been very patient and we will do our utmost not to disappoint you.”

The team’s legion of fans had to endure a season that promised much early on, but fizzled out as the year progressed only to gain some momentum in the final races, although it was a case of too little too late. In the end the team did not score a victory.

During the course of the year the team was rocked by James Allison’s tragic misfortune and subsequent departure, coinciding with reports that an “atmosphere of terror” prevailed at the team’s Maranello headquarters.

The saga compounded by Sebastian Vettel’s very public meltdown, which included an apparent spat between the German and Arrivabene who suggested – through Italian media – that the four times F1 World Champion should focus on driving and not on team management matters.

However, amid recent speculation that Vettel was on Mercedes’ radar in the wake of Nico Rosberg’s departure, the Italian team boss denied that their ace driver was demotivated.

“With Vettel and Raikkonen we have two world champions on our books. Sebastian was here [at Maranello on Monday], working in the simulator and he repeated the fact that he wants to win with Ferrari. It’s up to us to give them a car capable of doing that,” insisted Arrivabene.

On the topic of that 2017 car, which will be officially launched on 24 February at the team’s HQ, Scuderia’s chief technical officer, Mattia Binotto said, “There are so many changes to the rules relating to aerodynamics. We will see cars that are much quicker through the corners, under acceleration and in braking.”

“There is nothing to say that we here in Maranello cannot build such a car… It’s just a matter of time. What we lacked on occasions this year was the ability to react quickly. We must be able to introduce new solutions before the others do,” added Binotto.