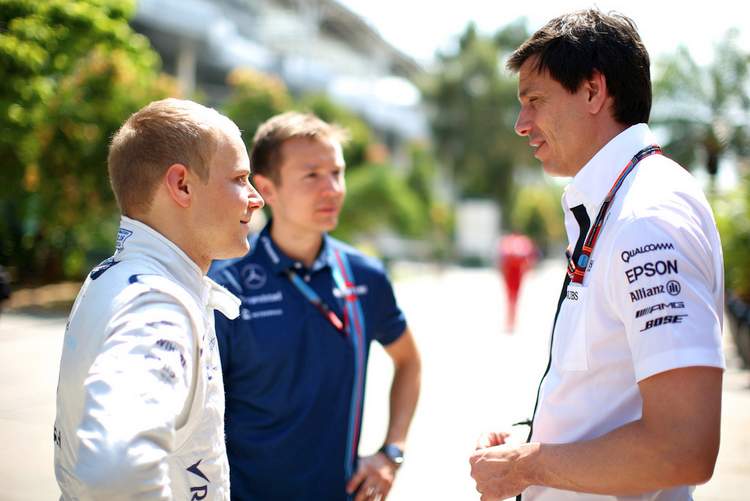 Mercedes have made a bid for Valtteri Bottas to replace Nico Rosberg, according to various reports in British media.

BBC and Sky Sports are reporting that Williams driver Bottas is top of the list of candidates to take up the most coveted cockpit in Formula 1.

With BBC claiming: “Wolff has approached Williams with a proposal that he gives them a major reduction in their engine bill – said to be in the region of €10-million euros – more than half the total fee – in return for releasing Bottas.”

“Williams also have the option to run Mercedes reserve driver Pascal Wehrlein in Bottas’ place,” added the report, which also suggested that the bid was declined by Williams.

The stumbling block is that Bottas is vital to Williams on several fronts, not least of which is the fact that the team have taken on big paying 18 year old Lance Stroll who will be relying on the Finn for mentoring during his rookie season.

Furthermore a number of sponsors including Martini are keen to have the experience of Bottas and an ‘older’ driver for promotional activities. In other words: it’s complicated.

While Mercedes themselves have declared that they will not break any existing contracts between drivers and their respective teams, thus a deal for Bottas would require Williams to be happy.

Thus Mercedes could (and probably will) sweeten the deal substantially and by all accounts are trying to do so in their attempt to sign a top driver to partner Lewis Hamilton in their second car.

In their favour they do have substantial leverage with Williams as they supply the Grove outfit with power units, thus an even bigger discount than the €10-million euros first offered may be more tempting. In the end money talks in Formula 1, and most professional sports for that matter.

The Mercedes team boss is also close to Frank and Claire Williams as he was once a share-holder in the team, while Wolff is part of Bottas’ management team.

Adding a twist to the whole affair is the fact that Mercedes technical chief Paddy Lowe is supposedly in talks with Williams to head up the team.

Apparently out of the running is Fernando Alonso who is committed to McLaren until the end of 2018 with no get out clause in his deal. Pascal Wehrlein remains an alternative option for the World Champion team should the Bottas bid fail.

Williams have refused to comment on these latest reports linking their driver to Mercedes for next season.

Watch this space, but meanwhile have your say: