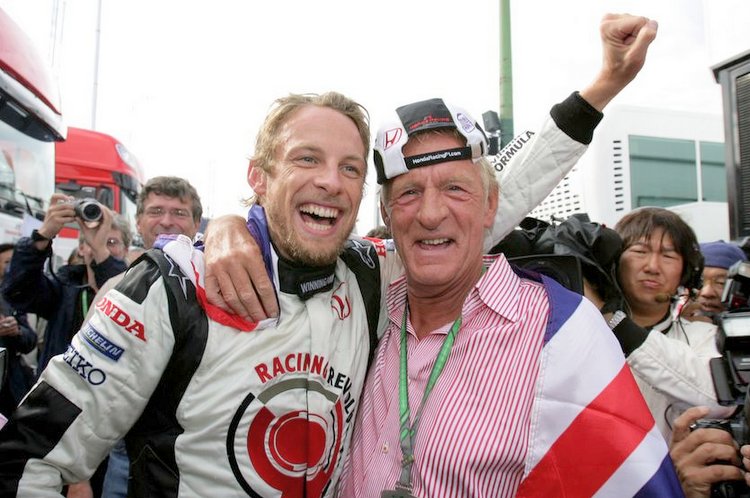 In the build-up to the final race of the 2016 Formula 1 season, news emerged that Jenson Button is set to retire from the sport.

Button was already due to step down from his race seat next year, taking on an ambassadorial role originally with a view to a potential return in 2018. But now Button has said he expects 2016 to be his last year racing in Formula 1.

That means the weekend’s Abu Dhabi Grand Prix will conclude what has been a 17-year career in F1 for Button and it has been a stint full of amazing highs and lows. During his long and distinguished career, Button has delivered numerous amazing race performances which have delighted motorsport fans in Britain.

He drove for numerous big teams including Renault, Honda and McLaren and he achieved his dream of becoming Formula 1 champion back in 2009. To celebrate Button’s stellar career, here is a look back at six of Button’s best and most memorable races from his time in F1.

After starting out his career with Williams and Renault, Button in 2004 joined the BAR team, which would go on to be taken over by Honda.

The 2004 season was the first season when Button had a genuinely quick F1 car and he showed the world just how talented he was. Button took ten podium finishes out of this season’s 18 races and he came third overall in the championship, behind only the two drivers of the ultra-dominant Ferrari.

A real standout moment from this season was the German Grand Prix, where Button came second after a long, aggressive but fair duel against Renault’s Fernando Alonso. Button came out on top of this duel, even though he had to cope with a loose chin strap on his helmet which threatened to choke him during the latter stages of the race!

Due to bad fortune and a lack of access to a race-winning car, Button had to wait a while before he got his first race win. But he finally got it on his 113th F1 race which took place at a wet circuit in Hungary.

Button started as far back in 14th but using his instinctive ability to find grip in wet conditions, he climbed his way up the order until he was near the top. When Fernando Alonso in the Renault retired with a mechanical fault while leading, that gave Button a clear path to a deeply satisfying and long-overdue victory

For the 2009 season, Button almost missed out on partaking completely due to his team Honda pulling out of the sport at the end of the previous year. But the remnants of this team were taken over by Ross Brawn and Button was given another chance to race, with the Mercedes-powered Brawn GP car.

The Brawn car proved to be the class of the field in the first half of the year and Button won six of the first seven races in 2009. Among those victories was an impressively dominant win from pole position at Monaco, the race all F1 drivers dream of winning.

There was a humorous moment that came at the end of the race too. As you can watch in the video directly above, Button accidently parked in the wrong place just after his win and had to sprint along the main straight to reach the podium where his trophy was.

While Button dominated the first half of the 2009 season in his Brawn GP car, the second year saw other teams close the gap and getting good results became trickier for Jenson.

In the second-to-last race of the year, hosted in Brazil, Button had the chance to secure the title but a difficult qualifying session meant he started back in 14th. To secure the title in the ensuing race, Button had to battle his way up the grid, which he did successfully by pulling off several courageous overtakes on cars in front.

Button managed to finished fifth, which proved to be enough to secure his dream of a world championship title.

After winning the 2009 title, Button took the bold decision of moving to McLaren the following year where he would have another champion, Lewis Hamilton, as his teammate.

While many questioned the gamble, Button showed from early on that his title was no fluke and he could keep up with the best.

While he may not have had quite the natural pace of the likes of Hamilton, Button could use his race savviness to get one over his rivals. One time he demonstrated this ability was during only his second ever race for McLaren, the 2010 Australian Grand Prix.

In mixed conditions, Button figured out the best time to come into the pits for dry tyres before anyone else and leapfrogged his way near to the front. When Red Bull’s Sebastian Vettel, who started on pole, retired during the middle of the race due to brake failure, Button took the lead and dominated the rest of the race.

When trying to pick out Jenson Button’s best race victory of all during his F1 career, the 2011 Canadian Grand Prix is a very strong contender for many.

Most of this race was held in very wet conditions and many of the partaking drivers struggled. Button himself had difficulties, colliding with his teammate Hamilton early in the race and he collided with Fernando Alonso’s Ferrari later too. The latter incident saw Button fall to last place.

But when the track started drying up in parts towards the end, Button switched to dry tyres and seemed to know how to handle the mixed road conditions better than anyone else. Button rapidly climbed up the positions until he had only race leader Sebastian Vettel left to chase down in a tense final few laps.

On the very last lap, Button had closed the gap down to less than a second. Then at turn six of the track, Vettel ran wide, allowing Button to snatch victory at the end, sending his team and spectators into jubilation. Afterwards Button described this win as his best race, and many including him will probably still think that remains true even today.