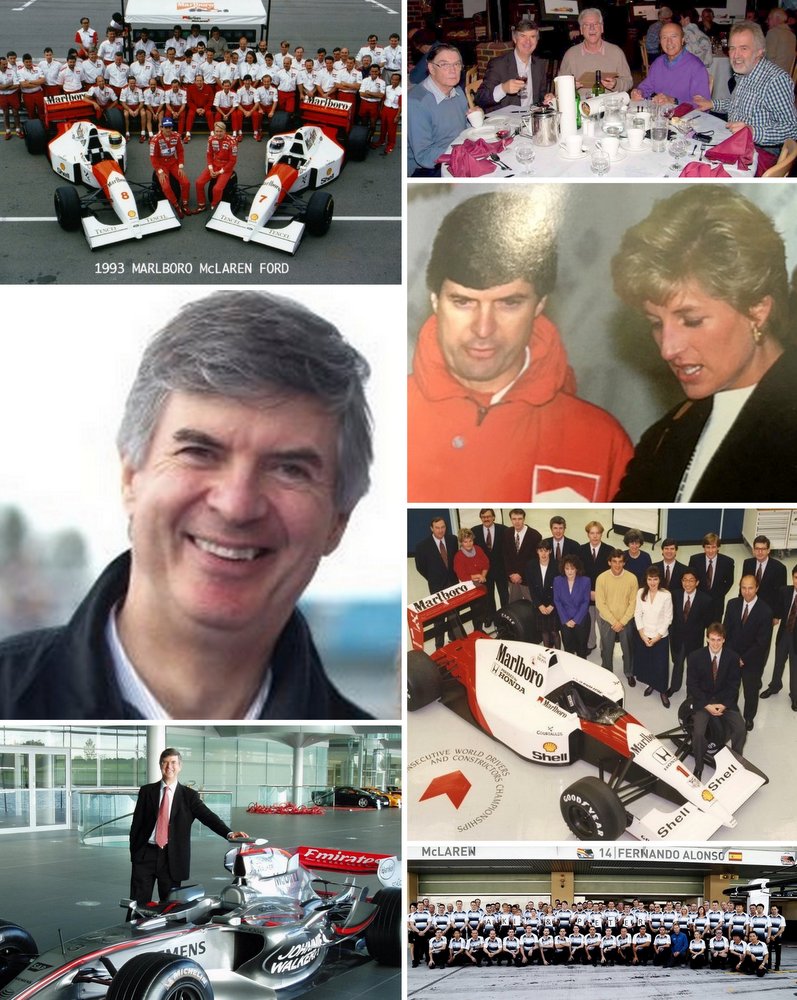 It was with great sadness that we learnt before the Abu Dhabi Grand Prix of the passing of Peter Stayner, who for his many years in Formula One was a foundation of the marketing team at McLaren.

Of course the media attention is very much focussed on the drivers, the team principals, personalities and celebrities, but what is seldom shown is that the world of Formula One is also a community and for those who are, or were, involved, it is a family.

Peter Stayner, for many years was very much part of that family, with many friends and colleagues not only within McLaren, but also up and down the pit lane. He was a true gentlemen through and through, always with a kind word, who made all those whom he came into contact with feel special, especially the ladies! His arrival at the weekend was usually announced by copious greetings of “hello lovely lady!”

Peter joined McLaren in 1989. He had already had a varied career in motorsport, including periods with the RAC and Brands Hatch, plus also as a manager of the Snetterton circuit in Norfolk. Legend has it that he turned a blind eye to closing time for a young hopeful Formula Ford driver from Brazil so that he could do a few extra laps testing. Peter would later be united with this certain Brazilian driver a few years later at McLaren at his Grand Prix debut with the team in Jerez, Spain, which was Ayrton Senna’s sixth win of the season.

Over the years driving to and from the circuits Peter was my navigator, and we got lost all over the world!

Peter became famous for his little pocket sized notebooks which were meticulously filled in his very neat but minuscule handwriting, with notes on directions, restaurants and names not only of the various sponsors attending the race, plus also the names of their wives and children, such was his attention to detail. The only problem, was that although this database of information was updated each year, sometimes the directions were not. I lost count of the number of times we went in the wrong direction leaving Barcelona Airport!

Mexico City was always a challenge. One night it took us over three hours to get from the circuit to the hotel through a whole series of wrong turns – when it goes wrong, it just gets worse!

But to be fair, Peter’s map reading skills were exceptional, especially with an Ordinance Survey map in the UK, finding short cuts and routes through the remotest areas of farmland trying to miss the volume traffic to and from Silverstone.

Peter and I became known as the Two Peters’ and compared, somewhat unkindly, to the fictional characters Thomson and Thompson from the comic series The Adventures of Tintin. These were two incompetent detectives who get lost frequently and provided much of the comic relief. Whilst the two were unrelated they looked like twins whose only discernible difference was the shape of their moustaches. In those days mine was more rustic Mexican style, whilst Peter’s was more debonair David Niven!

In those days the two of us at many of the races were the marketing department, a task now performed by a team of twenty plus or so. We complimented each other perfectly. I looked after the activities at the track, whilst Peter concentrated on looking after the sponsors (which included celebrities such as Princess Diana and giving her a personal tour of the pits at the Grand Prix at Donington) plus arranging and hosting dinners, for which the golden rule was that you always had to make sure that you had a sponsor to entertain!

Peter’s ability to network was legendary, especially at the circuit. Three different motorhomes, three breakfasts and he still never put on weight!

With Peter’s love of fine wine, the French Grand Prix at Magny Cours was always a favourite with an annual pilgrimage to Sancerre, where he had made good friends with an owner of one of the vineyards. For the lucky few this entailed a guided tour of the winery, with appropriate samples taken at strategic points!

For Magny Cours Peter always stayed in a special hotel, which from the map appeared to be in the middle of nowhere, which it was. However when you stayed there you realised why he liked it, because it ticked all the right boxes for Peter’s love of fine wine and cuisine. The highlight of the weekend was a traditional press dinner hosted by McLaren, with the creme de la creme of the British journalists including Alan Henry, Nigel Roebuck and Maurice Hamilton amongst others.

It was a strictly F1 passes left at the door evening and nothing from that evening could ever be quoted afterwards, as the ensemble regaled each other with hilarious tales from the world of F1. In fact a contributing factor to the no repeating of what happened that evening was probably more due to the copious amount of good red wine consumed and the lack of memory the following day!

It was when entertaining that Peter was at his masterful best. He was the perfect host, a true gentleman, always attentive and caring, with a focus of attention that made people feel special. This was especially so for the ladies, who he would make feel as if they were the only one in the room. With a glass of wine, held by the foot or base in order to maximise its chill, Peter would glide effortlessly around the room making sure everyone was okay, turning this social skill into an art form.

In fact so sublime were his hosting skills that many of the initiated thought he was just having a good time, daring to raise the question, what actually does Peter Stayner do? When Peter left McLaren for his sabbatical in Abu Dhabi they found out, because no one could come remotely close to the personal attention he gave to senior sponsors and VIPs.

At that stage Peter had a change of scenery when he joined the Yas Marina Circuit as Sporting Director for the forthcoming Abu Dhabi Grand Prix. By this stage I had left McLaren and was working at the Dubai Autodrome, so our paths crossed again and we had a fun few years in UAE motorsport, building the relationship between the two race tracks. However in the build up to the inaugural Abu Dhabi Grand Prix with the immense pressure on Peter to prepare for the big event, he still spared time to give me a full guided tour of the track and its impressive facilities.

The following year I returned to Abu Dhabi for the inaugural FIA GT1 World Championship with the Matech Ford GT team, which they duly won with Romain Grosjean driving. So who should present the winning trophy on the podium, but Peter! That was the time of the Icelandic ash cloud which grounded many flights, so we were forced to stay a few extra days in the UAE capital, which allowed extra time to catch up and Peter was the perfect host and tour guide.

After his Middle East adventure Peter was invited to return to McLaren, who realised what they had been missing and he resumed his ambassadorial duties, working on special projects and looking after VIPs. By this stage I was based in Singapore and over the years we had a regular diary date to catch up and gossip over a snifter in the build up to the Grand Prix, plus the customary glass of wine and post race analysis at the Conrad Hotel.

It was sadly after his last visit to Singapore that his illness was diagnosed. It was a true measure of the man that he wanted to make sure that I heard the news personally from himself. He had immense determination to fight on and stoically continued to work for as long as possible.

I last saw Peter in this summer in the UK after he had just returned from a couple of weeks in hospital. By this time the wicked debilitating disease had taken its toll and he could no longer talk, eat or drink in the normal way, and sadly his physical decline was noticeable. However he insisted that I had a glass of red and he was only sorry that he couldn’t join me!

I was there for almost an hour and half and despite his having to use an Etch A Sketch drawing tablet, which he used with his Mont Blanc pen with great speed and amazing dexterity, the questions and conversation flowed as we reminisced on the adventures we had together and the many memories we shared. He was very aware of his future decline, and appeared bravely philosophical, although with Peter being such a private person, you never really knew.

One of the great things about true friendship is that although you might not see someone for months or years, when you meet up, you can pick up the conversation where you last left off, no matter how long it has been. That was so true with Peter, always keen for a catch up for a good gossip, filled with humour, laughter and maybe not always politically correct.

That is so true of the relations Peter had with so many people, none more so than with McLaren Old Boys and Girls, especially those who were with the team during the golden era of the mid eighties to the end of the nineties, which is a common bond and privilege we all share.

Peter’s partner, Barbara Burns, has set up a Peter Stayner Tribute Facebook page here>>> so if you knew Peter, as a friend or colleague, you are very welcome to share stories and photos of him, as this not only will be a tribute to his life, but will also help us all with our healing and to remember all the wonderful memories we all have of Peter – a very special friend.

Inside Line Tribute by Peter Burns