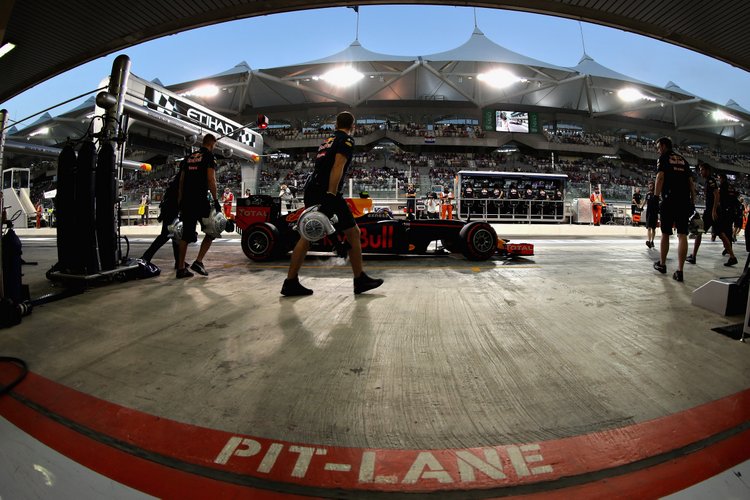 The 2016 Formula 1 season came to a close in tense style at the Abu Dhabi Grand Prix, with Lewis Hamilton winning the race in controversial style after employing tactics to try and snatch the title away from Nico Rosberg.

But second place for Rosberg was enough to take the championship, holding off Sebastian Vettel in the closing stages to become a first-time title winner. The 2016 finale threw up plenty of interesting strategy stories, here are the main headlines:

Facing the wrong way at the exit of Turn 1 on the opening lap isn’t the ideal situation, but few drivers could go from 22nd to fourth like Max Verstappen did – at the Yas Marina Circuit of all places, too.

Having clashed with Nico Hulkenberg and dropped to last place, Verstappen put his super-soft tyres (which clearly weren’t badly damaged after his spin) to good use and quickly advanced up the order through the midfield runners, proving how strong the Red Bull car was compared to those further down the grid.

Running long on the super-soft tyre ended up putting Verstappen back into contention, as he was able to lap for longer at a fast pace. It brought him into the play and ahead of Daniel Ricciardo, but Vettel’s charge meant he lost out on a possible third place – in part due to Verstappen’s soft tyres fading, as he was one of only two drivers on a one-stop strategy.

There were a few interesting strategy points from the first round of stops, in particular the tactics of Ferrari and Red Bull with Kimi Raikkonen and Ricciardo. On ultra-softs, Ferrari pitted Raikkonen on lap seven, giving him two extra laps on fresh Pirelli rubber before Ricciardo stopped.

The two had been close on the track before the stops and Red Bull seemingly pitted Ricciardo on lap nine to not lose too much time against Raikkonen, which proved to be right because he came out just behind the Ferrari. The overcut (if you can call it that) almost worked for Ricciardo.

But he eventually got the jump when Red Bull stopped Ricciardo first on lap 24, going from old softs to new softs. Ferrari reacted but it wasn’t enough and the Red Bull was through.

It all works out for Vettel

After the first round of stops, it wasn’t looking all that great for Vettel. He was running in sixth place, a little way off those ahead of him. But Ferrari actually got their strategy right in the end, despite some feeling a long second stint on softs was a mistake.

In the end, the softs ended up working well for a long stint, helped by the cooler conditions in the night. Vettel briefly held the lead when he stayed out and then pitted later on, for super-softs. This put him on the attack for the final part of the race and he put the tyre advantage to good use from the get-go.

He was quickly able to pass Raikkonen, Ricciardo and Verstappen, moving into third place. But one step higher on the podium wasn’t possible due to Rosberg’s strong top speed, while Vettel’s tyres also went off towards the end. Surprisingly, considering it wasn’t expected to be a good race tyre, the super-softs held up well in the end.

Hamilton does his own thing

This was the main event. Rosberg vs Hamilton for the title and after the first stops, it was Hamilton leading from Rosberg. The title was Rosberg’s at that point and Hamilton knew he had to do something if he wanted to swing it in his favour. But he had few options at his disposal.

The route he chose to take didn’t go down well with Mercedes. He tried to back Rosberg into the chasing pack in the final part of the race, helping Vettel and the Red Bulls to catch up. Mercedes told him several times to speed up but he continued to run at his own pace, which has caused a huge debate.

In the end, Hamilton won from Rosberg, so the plan didn’t quite work. But it was fascinating to see Hamilton putting his own strategy call into play. He spiced up and added a splash of tension into the race, which was welcome from a viewing point of view, but obviously it put Mercedes in a tricky situation. It’ll surely be talked about for quite some time…

Many thought the super-soft tyre should’ve been avoided all weekend but in the race, it actually worked very well. Verstappen used it on his long first stint, with Ricciardo also running it early on as Red Bull gambled in its qualifying strategy. Vettel also put on the super-softs to end the race.

Quite a few drivers also went onto the super-soft tyre for the final stint, seemingly mimicking Vettel. It put them in a stronger position for the run to the flag, but it didn’t have quite the same impact for the likes of Esteban Ocon and Romain Grosjean.

One driver who did something VERY different was Marcus Ericsson. Because, what did he have to lose? Sauber put him on a ridiculously long first stint on the softs, going all the way to lap 38. By that time he was struggling a lot and fell down the field, but a super-soft stint to end the race helped him make up a bit of ground.