Keke Rosberg: I took a deep sip from my beer 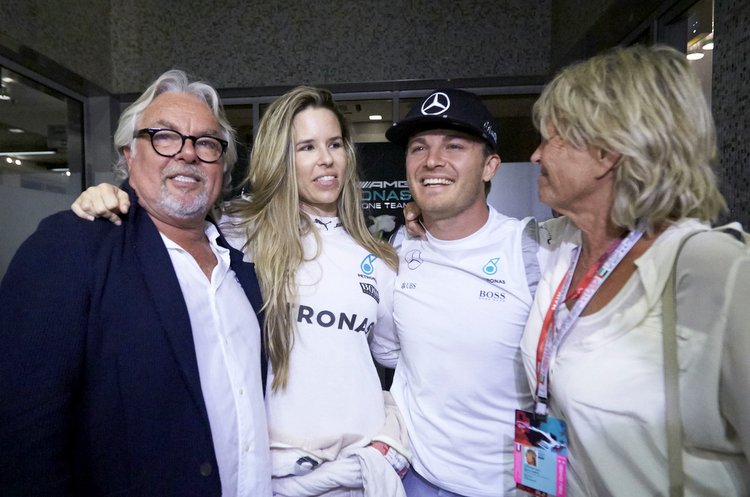 Every Saturday this season before a grand prix, Nico Rosberg has received a text message from his father Keke offering some simple words of support from afar.

“Most of the time it’s like ‘pedal to the metal tomorrow, full stop, exclamation mark’,” Formula One’s newest world champion smiled on Sunday after achieving his lifetime’s ambition with Mercedes.

This time, for once, his father was there to congratulate him.

Sunday’s success under the Abu Dhabi floodlights made the Rosbergs only the second father and son combination to win the title and 1982 champion Keke became the first to actually see his offspring achieve the feat.

Britain’s double champion Graham Hill died before Damon won in 1996 which, as Rosberg senior said with a smile, makes him “the only alive one. Just.”

The older Rosberg was not physically present at the moment of glory, however. He watched the race on television at a friend’s house in Dubai before joining the paddock celebrations some time later.

Cigar in hand, and congratulated by a stream of passing friends outside the Mercedes team hospitality, he savoured the moment.

For six years, the 67-year-old said, he has declined interviews about his son. If ever there was a time to break the habit, it was now.

“There was no choice to come here (earlier),” he said. “If I had been here for three days doing nothing, there wouldn’t have been a peaceful minute for me.

“So we discussed it with Nico and I said: ‘Look, I can’t come. It doesn’t work’. So that’s why I didn’t come. I don’t think Nico knew exactly where I was, but he knew that I was in Dubai.

“I’ve only seen him for 45 seconds in the garage so I haven’t said that much,” he added. “It’s a family sport and he knows what it means to me and to him.”

Nico had needed only to finish on the podium to be sure of the title and he slotted in to second place at the start behind team mate and title rival Lewis Hamilton, who slowed the pace in the hope that others would be able to pass the German.

If the younger Rosberg was feeling the stress in the closing laps, so too was the older one.

“I took a deep sip from my beer and thought ‘Oh, this is going to get hot,” chuckled Keke.

As for his son’s tenacity in withstanding immense pressure during a season of so many ups and downs, coupled to pendulum swings in form. Rosberg senior said, “I don’t know [how he does it]. It’s remarkable. I admire him for his mental strength and his commitment. I don’t know how the others do that but with Nico it’s like 110% and it has nothing to do with the way we went about being an F1 driver, absolutely nothing.

“The last three years, there has been tremendous pressure because you’re fighting for the win every weekend, and fighting for the championship every year, and a DNF hurt you really big time.