Vettel: I didn’t want to be in Nico’s shoes in the last couple of laps 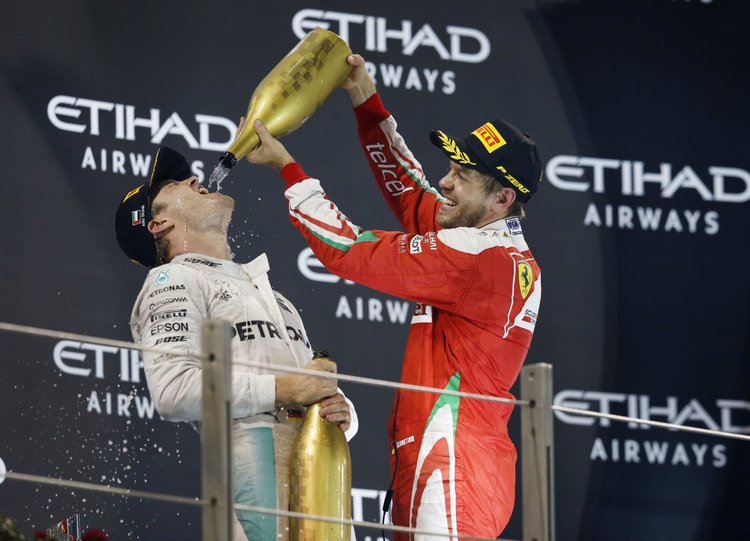 Sebastian Vettel has endured a below par season, criticised for several of his perfomances, but at the Abu Dhabi Grand Prix he showed his true colours as he pursued a place on the podium and nearly snatched second place in the process.

Ferrari have been criticized a number of times on the strategy front but today they absolutely aced it. Brilliant tactic – long second stint, attacking on the supersofts, tell us your feelings and particularly your decision-making process in the last couple of laps?
SV: Well, before I answer your questions, congratulations [Nico]… it was tough out there. I didn’t want to be in his shoes in the last couple of laps…
Well, in the last couple of laps it was clear. It was clear we would be able to make big progress but before it was difficult. Obviously with Max coming back, staying out so long, coming back to fight for the last podium spot, or the same positions as the group of Kimi, Daniel, myself, made it tricky. Then Max pulled in very early. That was one way to do it and the other way was to go long. When I was behind the two cars of Kimi and Daniel I was trying to save my tyres and trying to stay in reach but still having enough tyres to make it longer and once they pulled in it was clear that we would go long. Then I think those laps were really critical. Fortunately I had some tyres left and I could really make that count with consistent laps. I didn’t lose too much versus the group that had pitted already. Once I came out the question was ‘how long are these cars going to last’ and it proved to be just enough. Daniel was fairly straightforward to pass, but then when I arrived behind Max, the problem is that you have car after car after car and you begin to slide, so my tyres got worse. Then I was behind Nico and I was faster, but I think also due to the fact that Lewis was slowing down. I tried everything but they were very, very quick down the straights. I think with the Red Bulls it was a little bit easier. I think also, Max didn’t have DRS, whereas at the end I think Nico had DRS. The second straight was the spot I was having a look, but Nico defended well and closed the inside so I couldn’t really go anywhere. I couldn’t try something really stupid because Lewis was just ahead, so if I really dived down the inside or down the outside then I have a risk of hitting Lewis at that point. It as critical and I also saw Max coming back in the mirrors but for sure the last laps were intense, I was thinking also at some point to win the race as well, because I think the chance was there, but both of them did their job well at the end. Nevertheless, as you said, happy with the podium.

Could you have even more pushed on Nico in the last couple of rounds?
SV: Well I did what I could, obviously. At that point, you follow two cars, you slide, the tyres start to go too hot. I was struggling with my fronts at that point so it was difficult to stay close. So I did what I could. As I said, Lewis was probably a bit too close otherwise I could have had a better look. Nico defended well. Turn 11 was the spot where maybe I could have had a chance, and then maybe I could have had a chance and then towards the last laps he had always the tow also from the car in front, from Lewis. Without the tow, I think I could have had a better chance but that way it was impossible. My interest as soon as I passed Max was to win the race – but bearing in mind obviously that they are fighting for the Championship and… I mean we could all feel and see what was going on. Lewis was trying to back Nico up into the rest of the pack… I’m sure [Lewis] would [not] have waved me past as well. As I said, my main interest was in winning the race but I couldn’t get past both of them.

In a different condition, without the Championship deciding this last race, you could try something else? And when, during the race, when said by radio “it’s four laps that I’m asking to do something,” because in that moment you didn’t have clear picture of the race? You change something in the strategy during the race?
SV: Well, you have a plan but then, to be fair, you never know how the race unfolds. Obviously we are all starting from the grid, you might change position first corner, first lap. So the plan is flexible. I think you know what to do, you know where you can go with which tyre, etcetera, but from where I was obviously I was stuck. It was very difficult to make progress because the car in front of me had a tow from another car, so obviously Daniel was behind Kimi and therefore it was difficult for me to really get close and overtake. I was probably a bit quicker but not enough – and it’s also not the easiest track to overtake. And then I was asking to do something and at the same time Max dived into the pits and then that opportunity was gone, because it was really going for an aggressive undercut, going very long on the harder tyres, or the soft tyres. When that door closed obviously it was clear that Kimi will come in next, and Daniel, because they were battling each other and then I decided, we decided to go on the supersoft tyre, try to do something different which turned out to be the right thing. And at the end, could I have done more? I don’t think so. As I said, I was running out of tyres, I think. I have also one comment to make. I think, in my point of view, you don’t win the Championship by luck. Nico won the Championship today. He’s a deserved champion. You collect a lot of points throughout the season, sometimes you might have, yeah, fortunate situations, unfortunate situations with your car but I think there’s been other situations in the past with other drivers, that’s the way it goes. Sometimes you have better years in this regard, sometimes worse years but I think today is Nico’s day and it’s a sign of respect and greatness to give him that. I think we owe it to him, he’s a deserved champion.