Rosberg vs Hamilton: May the best man win 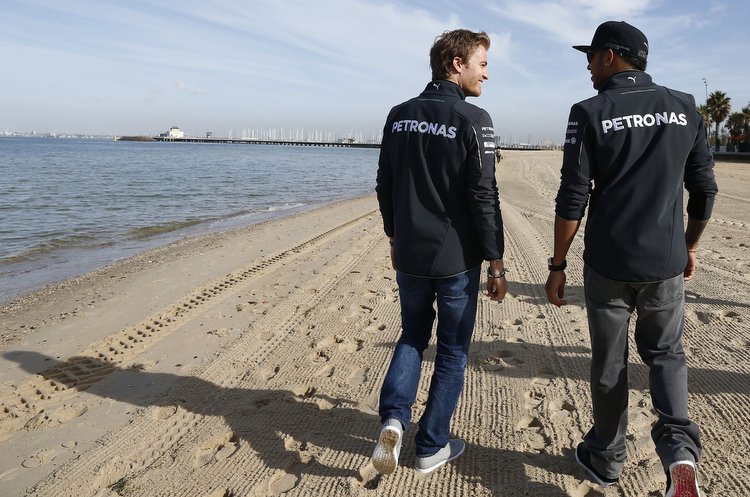 Nico Rosberg starts the season ending Abu Dhabi Grand Prix with the Formula 1 world title he covets so keenly tantalisingly within his grasp.

Rosberg has had to sit and suffer as his Mercedes teammate Lewis Hamilton ran off with the drivers crown in 2014 and 2015, but after an explosive 2016 season played out over a record 21 races Rosberg is now so close to the F1 holy grail he can see his image reflected on the trophy.

Hamilton has rattled off wins in the last three races in the United States, Mexico and Brazil to ensure the title goes down to the last throw of the dice at Abu Dhabi’s glittering Yas Marina circuit.

With a 12 point cushion the task facing Rosberg, whose father Keke won the title in 1982, is clear. As long as he finishes in the top three the drivers’ crown is his irrespective of Hamilton’s performance. He starts on the front row alongside pole sitter Hamilton who bossed final qualifying at Yas Marina.

As he has done all season Rosberg is playing his cards close to his chest, refusing to get carried away by talk of his maiden world championship, “I want to try to win the race. Keep it simple. I don’t think of ‘what if’ – that would be the wrong approach.”

For Hamilton, whose roller-coaster season has been marred by some desperate bad luck, he will need the F1 gods to be in a particularly malevolent mood towards his rival if he is to join the exclusive club of drivers who have won four titles.

“I’m the champion in my own heart, whatever happens,” Hamilton remarked ahead of the weekend in Abu Dhabi.

For Mercedes the Rosberg v Hamilton rivalry is priceless promotion for their brand, with team principal Toto Wolff keeping the box-office drama on the road.

Which is more than his drivers managed to do in Spain when they wiped each other out with a first lap crash. Wolff, like tens of millions of F1 fans, is anticipating a mighty scrap under the Abu Dhabi floodlights.

“It’s normal that here this is like a volcano to erupt with two of them, the two very different personalities,” he predicted. One is going to dig a little deeper, the other one is going to do it in a different way… ”

Sunday’s title showdown evokes memories of the infamous climax to the 1990 championship, when Ayrton Senna took his McLaren teammate Alain Prost out at the first corner in Japan.

Wolff though is adamant that will not be repeated, “I think it is very difficult to construct such a situation and make it work. I don’t think that’s the way Nico operates and it would certainly not look very good.”

One former double champion, Fernando Alonso, believes both Rosberg and Hamilton are deserving of the title, “I think Rosberg has been very consistent. He is always a driver who is very, very consistent – never under-performing and he always extracts the maximum.”

“Hamilton is, I think, the champion that we all see – all the championships and victories that he has achieved in F1 are because he’s a super-talented driver. They both deserve the title!”

Aside from the destination of the 2016 championship Sunday’s race spells retirement for two of the sports most cherished stars – 2009 world champion Jenson Button and Brazilian Felipe Massa.

With regards to the title showdown we share the sentiments of team chief Wolff, who said: “After such a battle of endurance, the winner can say without doubt that they earned it. We are all excited to see who that will be. May the best man win.”