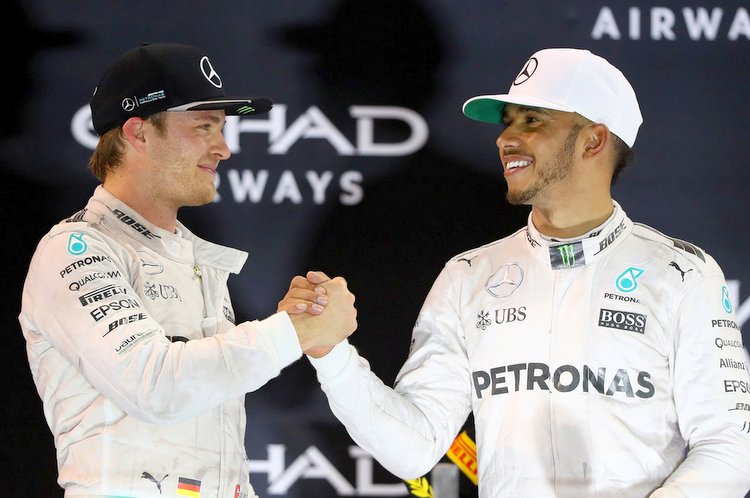 Lewis Hamilton did all he needed in his long shot effort to win the 2016 Formula 1 World Championship by powering to victory at the Abu Dhabi Grand Prix, in the end he was five points shy of retaining the title despite trying every trick in the book in the final laps of the final race of the season.

He spoke after an exciting and decisive race at Yas Marina Circuit.

A strong end to your season. Fairly straightforward grand prix for you really until the final laps when obviously… you were saying in the press conference earlier in the weekend that it was difficult to back the pack up but tell us your thinking in the final part of the grand prix?
Lewis Hamilton: Yeah, obviously happy with the win, it was relatively easy to get the win in the end. Great job by the team throughout the weekend and through the year so big thank you to everyone there. I knew being in the lead I knew I was losing the world championship, I was hoping that Sebastian… I heard the pace he was on and I knew I could do that pace exactly, so I was hoping that he would close up, but I guess he said his tyres were going off towards the end and Nico drove well to not make mistakes.

How do you feel then about the season, looking back?
LH: Good. I did everything that I could, particularly towards the end and obviously Nico had a very, very clean year without any real issues to be honest and that’s why we sit in this position right now. But he did a fantastic job, so big congratulations to him, it’s a great feeling to win the world championship and I look forward to fighting with him next year.

This season you took your fans and everyone on quite a rollercoaster of a ride. For the millions of fans that watched you along the way, you had some incredible drives and you also achieved quite a few goals, with that are your able to take those positives heading into the off-season?
LH: Most definitely. There have been a lot of great things that have happened this year. One in particular is the bond and relationship I have with my mechanics and engineers – my new mechanics – that joined my side of the garage. They did a fantastic job all year long. I think the working relationship has been better than ever, particularly going through all those experiences. There’s that and I was generally quickest most of the year, so it’s definitely been a positive, a lot of positives to take from it. So I take that into next season.

How much was [it] annoying [you] the box asking you to improve your pace and aren’t you afraid that the relationship with the team now is a little bit more cold?
LH: Not really. I don’t know why they didn’t just let us just race. There was never a moment where I felt I was going to lose the race. It’s a shame that they wouldn’t but it’s quite clear their through process and yeah I mean I don’t really have much to say.

To follow up on that, do you find it an inconvenience… do you find it a bit annoying that you receive instructions like that a few laps from the end when you’re under intense pressure in a title race? Could you do without that?
LH: Not really – because it wasn’t really intense to be honest. It was pretty chilled at the end. There was not much… maybe intense for you but it wasn’t intense for me. No. For me it’s… I’m in a position where I’ve obviously had a lot of points lost during the season so for me, I’m out there fighting and I generally never try to do anything to harm the team or the brand or anything like that. But we’ve won the Constructors’ Championship so it was down to me and Nico today. And however, they still felt they needed to make comments and so… well, y’know, we’ll discuss it afterwards as we always do as a team and pull back in. But we can’t let that overshadow the fact that Nico’s just won a Championship and the team has dominated all year long, we’d had more wins than any other team I think in the past maybe. So, we cannot ignore that fact that it’s been an incredibly successful year.

When you realised that Nico had difficulties to overtake Max, did you think maybe you have more chance to win the Championship?
LH: Not really. I think that that point I didn’t really know… I didn’t have a lot of information from the team in terms of what I was supposed to do so I pushed a little bit, got a little bit of a gap. I was obviously just take care of my race – but I didn’t know if I needed a ten second lead or less. So, I just tried to look after my tyres and get to my target, which I did. And then I saw that Nico had passed and picked up his pace which was good, and at that point I tried to pick up my pace also.

Do you really think it’s fair to slow down the race on purpose only to push you team colleague into troubles. Only in terms of being fair.
LH: I don’t think I did anything dangerous today. So, I don’t feel I did anything unfair. We’re fighting for a championship, I was in the lead, I control the pace. That’s the rules.