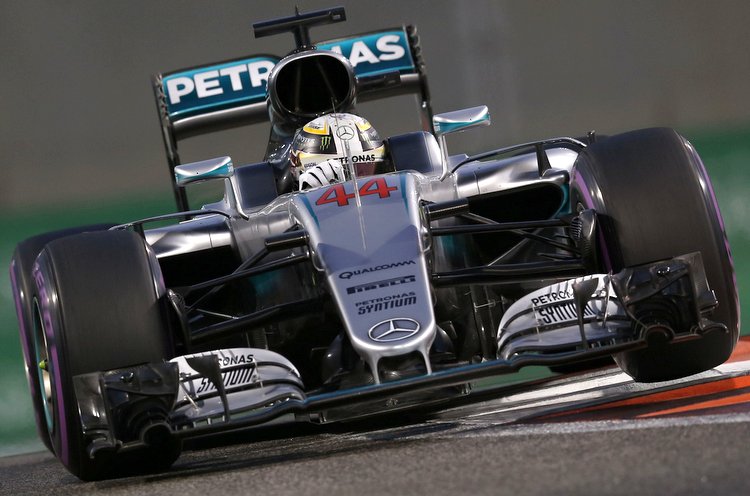 Lewis Hamilton signaled his intent with a commanding performance during qualifying for the Abu Dhabi Grand Prix, where he out-qualified his Mercedes teammate and title rival Nico Rosberg by three tenths of a second and set himself up in the best possible way for a vital victory.

The reigning F1 World Champion was untouchable throughout the session, run in the Abu Dhabi dusk, which started with him drilling home the advantage, over his title rival, in Q1 when he ended up a second quicker than anyone else.

Hamilton was not always the fastest through the first sector, but he owned the second sector and was simply mega in the final third of the lap, as he powered to his fourth top spot in a row and the 61st pole position start of his career.

He said afterwards, “It was strange coming here this weekend as it was the last practices and qualifying with this car, it’s been incredible. It’s been such a privilege driving this car.”

“I wouldn’t have had the 61 poles I have now if it wasn’t for everyone at the factory, so thanks to them. First sector, I knew I had pace so I didn’t overcook into Turn 1 and on the rest of the lap I had it under control,” added Hamilton.

Rosberg chased his teammate throughout the session and in the end will be relieved to start the race on the front row. After all he needs only to finish on the podium, on race day, to claim his first world title. Thus it was another case of job done for him on the night.

“I have come here to try and be on pole and try and win the race tomorrow,” said Rosberg. “I am not ecstatic by today, Lewis was just that bit quicker but there are still opportunities tomorrow and I’ll go for the win.

The much anticipated Red Bull ‘spanner-in-the-works’ simply did not materialise, although Daniel Ricciardo did qualify third, he was half a second off Rosberg’s pace and over three quarters of a second down on Hamilton’s best – the Silver Arrows have had the ability all season to crank out a few more horses when required.

Nevertheless, the Australian will start the race with the Pirelli supersofts, as Red Bull opted to run both their drivers on the tyre in Q2 as opposed to the faster but less durable ultrasofts, which may well provide the drama in the race.

Ricciardo said, “We’ve got to try something. It seems to be a bit of a trend this year, if we’re in a position to qualify on a different tyre we’re try and see if it gives us an opportunity.”

“I was pretty slow starting the qualifying session but Q3, when it matters, I put in some good times. Third was the target, hopefully we can be somewhere up here [on the podium] tomorrow,” added the Red Bull driver.

Sebastian Vettel ended the morning FP3 session fastest, but that form did not carry over for him as he could only mange fifth when it mattered, while his teammate Kimi Raikkonen was fourth fastest, thus ending the season having out-qualified the German 11 to 10.

Max Verstappen looked good for a top three time early in the session, his supersoft time was only half a second off the top time in Q2 set with ultrasofts. But he did not manage to hook it all up in his final run of Q3 and aborted the lap. He was sixth fastest.

As has become the custom of late, Force India were best of the rest with Nico Hulkenberg and Sergio Perez set to start from seventh and eighth on the grid.

Fernando Alonso was ninth quickest in the McLaren, ahead of Felipe Massa in the Williams who will start his final grand prix from tenth.

McLaren’s Jenson Button, who is also expected to retire from F1 after the Abu Dhabi Grand Prix, will line-up 12th on the grid for his final race.