Wolff: They can’t be in love with each other 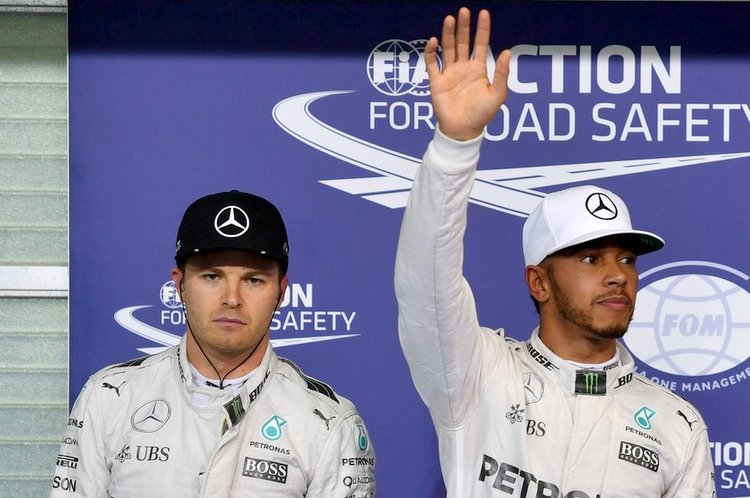 The mind games ahead of title-deciding Abu Dhabi Grand Prix intensified on Saturday as Nico Rosberg and Lewis Hamilton square off for the title at the season finale, while Mercedes reap the benefits of the column inches being devoted to the contenders.

Aided by a flourish of encouragement from Mercedes team chief Toto Wolff, defending three-time world champion Hamilton continued to produce a flow of words while his teammate and rival championship leader Nico Rosberg stuck to his stoical, largely unflustered, stance.

“I’m the champion in my own heart, whatever happens,” said Hamilton, who has to overhaul a 12 points deficit to claim a fourth title – a position that requires him to win with Rosberg failing to finish on the podium.

It was just another line to maintain his ascendancy in the psychological battle that has fascinated an excited media circus at the Yas Marina circuit.

The two drivers, both 31, one British and one German, make a sharp contrast in their image and behaviour and have endured a stormy rollercoaster three years as teammates.

For Wolff, and Mercedes, it is priceless promotion for their brand. Every lens is focused on the Mercedes drivers, their cars and their team members.

Austrian Wolff’s face is the subject of as many close-ups as a Hollywood pin-up and he, like a great orchestra conductor flourishing his baton, has kept the music loud.

“It’s normal that this is like a volcano to erupt with two of them, the two very different personalities,” he told reporters. One is going to dig a little deeper, the other one is going to do it in a different way…”

Every quote is recorded and scribbled down. Wolff is a master of the sound-bite, “It is also clear, and we have to acknowledge it, that now everything is on the line.”

“It’s about losing or winning the drivers’ world championship. They can’t be in love with each other this weekend, but they need to play all the tricks to put themselves in a situation to win the championship.”

“You just have to respect that there is a fierce rivalry, the competition is intense and, as since 2013, we just have to try to keep it together with up and downs.”

Wolff revealed that his worst memories of 2016 have been the late collision between Rosberg and Hamilton in Austria, where both men finished, and the crash in Spain that took them both out of the race.

Over the years, several showdown races have been overshadowed by deliberate collisions and controversy including the most infamous – Ayrton Senna taking his McLaren teammate Alain Prost out at the first corner of the 1990 Japanese Grand Prix.

The prospect of any kind of repeat has been rejected, by all concerned, but it lingers in the mind.

“There are some examples in the past that have been very prominent and very controversial,” said Wolff. “Lewis’s hero [Senna] and the other way around.”

“I think it is very difficult to construct such a situation and make it work. I don’t think that’s the way Nico operates and it would certainly not look very good.”

For Rosberg it would be out of character for him to choose it, even if he has displayed a more steely sense of aggression this year.

A gentleman racer through most of 2015, he changed his approach after Hamilton, with his street-racer mentality, had charged to his third title with a month to spare. They go into Sunday’s race with nine wins apiece.

Hamilton has the simplest target, but needs Rosberg’s mental management system to crumble under pressure if he is to win and seize a fourth drivers’ crown.

It was, therefore, no surprise that he told British reporters that he felt already that he had earned the championship.

“I think, in my heart, I will feel – and maybe I should keep it private to myself – but I feel a certain way, in my heart, how I have performed…

“If he is labelled ‘world champion’ it doesn’t necessarily mean that’s the way it’s labelled in my heart.”

He added that he felt the same way about the 2007 championship when he missed out at the final race in Brazil in his rookie season.

Wolff or another imaginative Mercedes executive might have scripted it all.

It is the ‘Rocky’ of motor racing – the mixed-race kid from a broken home on a Stevenage council estate fighting the gifted and privileged flaxen-haired Monegasque son of a former champion. And it will give Mercedes global media air time.