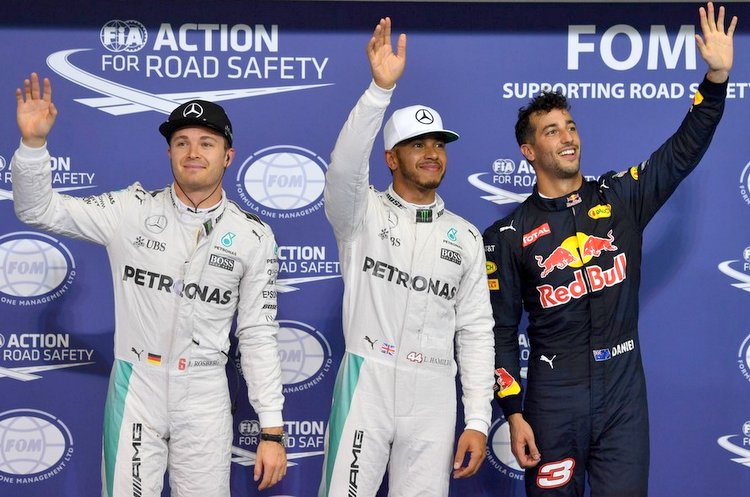 Lewis, congratulations, a fantastic lap, your 12th pole position of the year – that’s something you’ve not done before in your Formula One career, big number there – and what a time to do it?
Lewis Hamilton: Yeah, well, I can’t believe I have 61. That’s four more to go to try and catch Ayrton. It’s been strange coming here this weekend, realising that these are going to be the last practice sessions, the last qualifying sessions with this car, which has been so incredible. You never know when you’re going to have a car like this ever again. I hope we have another one in the near future, maybe next year. It’s been such a privilege driving this car. This weekend so far I’ve got the car in a real sweet spot, great work done by my engineers, faultless mechanics again; they have done an incredible job. Everybody back at the factory I just want to thank everyone. I wouldn’t have the 61 poles I have now if it wasn’t for them, so a big thank you to them. Yeah, perfect position for tomorrow.

Same pattern both laps in the final part: a tiny bit slower than Nico in the first sector and then a good but quicker in the middle sector. Tell us how that came about?
LH: Yeah, first section… I knew I had pace throughout the rest of the lap, so I was relatively cautious… well, not cautious, but I didn’t overcook it into Turn One, so that’s really where the little bit of time was to Nico. Otherwise, the rest of the lap I had it really under control, so I just made sure I maximised those areas.

Very well done. Coming to you Nico, as we say you were a tiny bit quicker in sector one, but a little bit down in sector two, but clearly, as long as you are sitting here tomorrow you will be world champion, so how disappointed can you feel about the outcome of this qualifying session?
Nico Rosberg: Well, as I’ve said, I’ve come here to try to be on pole and try and win the race tomorrow. That’s what I love to do, so I’m not ecstatic about today. Lewis just did a great job and was a couple of tenths quicker. It just wasn’t possible for me to do that time today, even though I gave it everything. But as we know there are still opportunities tomorrow and for sure I’ll try and go for the win.

You came running out of the team office wearing you headphones, singing as you went to the garage, so you were obviously feeling relaxed, but was it a rather tense first lap in Q1? There were a couple of mistakes there. And have you felt the tension this afternoon?
NR: Adrenalin is always there in qualifying, you know, for sure. But that’s what great about it, to really go on the edge, go to the limit, push flat out. And it was feeling good out there. I had a good balance and everything, so I was quite pleased. As qualifying went on it felt better and better and I got a good lap in in the end in Q3, but not good enough.

Very well done. Coming to you Daniel, great lap in Q3 to get yourself up among the top three and starting tomorrow on the supersoft tyre. You were hedging your bets a little bit at the end of Q2 but you decided to stick with it. It’s not necessarily been the most successful tactic this year, but what makes you think it’s going to be a winner tomorrow?
Daniel Ricciardo: We’ve got to try something. It seems to be a bit of a trend this year: if we are in a position to qualify on a different tyres, then we’ll try and see if it gives us an opportunity. Yeah, we’ll see what it does tomorrow. Hopefully it puts us in the fight. Beyond that I think Q3 was good. It was a pretty slow-starting qualifying session for me but we sort of chipped away at it and then in Q3 when it matters I felt like I had put in some good times. Happy – third was the target, hopefully we can be somewhere up here as well tomorrow.

Very well done Daniel. Back to Lewis. A thought about the race then: You’ve been totally in control all weekend but you can’t control the outcome as far as Nico getting on the podium tomorrow. What’s the game plan for the race?
LH: Well, so far this weekend has just been solely focused on getting to this position, which I truly believed I could. And obviously it worked. I guess this evening and tomorrow we’ll sit and work with my engineers and strategist to full understand the scenario and what I’ve got to do. Obviously I want to get away and try and win this race. Yeah, I’m hopeful… when he [Daniel] was just talking there… he usually says ‘winner, winner, chicken dinner’… is that right, is that your saying? I kind of want him to be saying something similar to that tomorrow.
DR: You want me to win?
LH: No! Second, second, chicken… what’s the second one!?
DR: It doesn’t exist!

Lewis, as you were saying a moment ago, half the job done in your stated target of dominating this race weekend. I just wonder how you’ve been feeling. You were here on Thursday, you were very philosophical, you were reflective and very relaxed. You seem to have carried that all the way through the weekend.
LH: Yeah. I tried to solely focus on doing myself proud, doing my team proud, doing my family proud – and doing Aki proud. I’ve come here with good energy. A lot of positive people around me and I’ve felt great in the car – as I have done really this latter part of the season. I actually felt great earlier on in the season. It’s kind of crazy to think I have 12 poles considering I didn’t even compete in three of them, so could have been the ultimate year of pole positions – but still I’m very, very grateful for the ones I have and I will hopefully continue to be driving like this in the future.

Nico, we were talking a moment ago with Daniel about this decision to start on the supersofts. I guess from your point of view, given that you want a nice, clean start tomorrow, the fact that you should have that little bit of extra bite off the line with the ultrasoft in comparison, does that give you a little bit of comfort as you go to bed tonight?
NR: I hadn’t thought about that yet in that sense. I was still thinking about qualifying at the moment. But yeah, I guess, better to start the race and then we have to see how the ultrasofts hold up. But we’re very confident that we’ve chosen the right tyre for the best possible race tomorrow. So… optimistic.

Daniel, one thing was clear yesterday from the long run pace, that you’re in the game when it comes to the race – perhaps more than you were in qualifying. So, is that the way it looks from your side of the garage?
DR: Yesterday it did. I think as sort-of predicted, Mercedes would pull a little bit more on us today in qualifying but we’ll see how the race comes back to us. I think that’s why we wanted to do something a little bit different as well and try the supersoft. Might just give us a bit more range at the start and then might put us more in the race towards the end. But yesterday, yeah we were strong on long runs, looks good. I think it’s going to be fun tomorrow. Obviously there’s the title on the line with these guys here, so it’s going to be interesting. Hopefully it’s fun throughout the pack and we can do something to make it even more exciting than it already is.

Lewis, you mentioned that on the eve of the 2014 title decider, I think you said it was the only time you haven’t slept all night and it was the worst night’s sleep you’d had. You seem very zen, almost chilled and mellow. How are you approaching tomorrow? Are there any nerves or are you just taking it in your stride?
LH: I feel amazing. I’m sitting on pole right now so… I feel energetic, I feel confident, confident of what I’ve been doing in the car. It’s a much different scenario to 2014. Obviously the reasoning of not being able to sleep then was because I’d worked so hard during the year and again, faced lots of different challenges throughout the year and I had more wins and yet that double points system could have just thrown everything into the wind. It wasn’t really deserving, so that was really the only thing, and having lost the championship in 2007, knowing what that feels like, so it just played on my mind, but I have everything to gain tomorrow so it’s just the complete opposite in the spectrum and yeah, super-excited about it.

Nico, in qualifying, 27 times in a row you have been in the top two without penalties. How would you explain that kind of consistency: 27 times in a row?
NR: I didn’t know that, yeah, of course, sounds good and for sure that’s one of the reasons why I am sitting here at the moment. I’m fighting for the championship at the last race. I’m sure it has been one of the key ingredients. In general, yeah, I’m proud of the season, proud of the season I’ve been able to do until now. It’s been a great year, my best so far but one race to go so let’s see.

Nico, if there is one moment where you have everything to lose it is at the start of the race. Do you reflect about that? Are you being more conservative? And if you are happy that third on the grid is Daniel instead of Max, in spite of Max’s fair but sometimes aggressive…
NR: Again, it’s something that’s a bit too much thinking. I like to stay on the positive side or on the optimistic side. The whole weekend counts. It’s never easy to try and win a race in F1. So yeah, I just want to keep it simple. Don’t think about what if or all these kind of things you were just mentioning now. That would be the wrong approach to do a good performance tomorrow.

On a different subject, it looks like there will be standing starts next year after the safety car. What do you guys think about that and there could be a lot of marbles on the line for the drivers?
LH: Marbles where? It shouldn’t be much different to now, I should imagine. Yeah, they should clean it up for the start so generally not marbles there, but I guess for the restart maybe. That would be interesting.
NR: Is it confirmed? Teams agreed to it? Come on, let’s talk about that on Monday, come on, seriously. Afternoon; in the morning I’m not available.
DR: It’s terrible if you’ve got a 40s lead but great if you’re in second place. So, we’ll see. I think it will be… obviously it creates more variability again so if the race is looking a little bit stationary then that could definitely spice it up. There’s pros and cons. I think for fans it’s going to be more exciting.