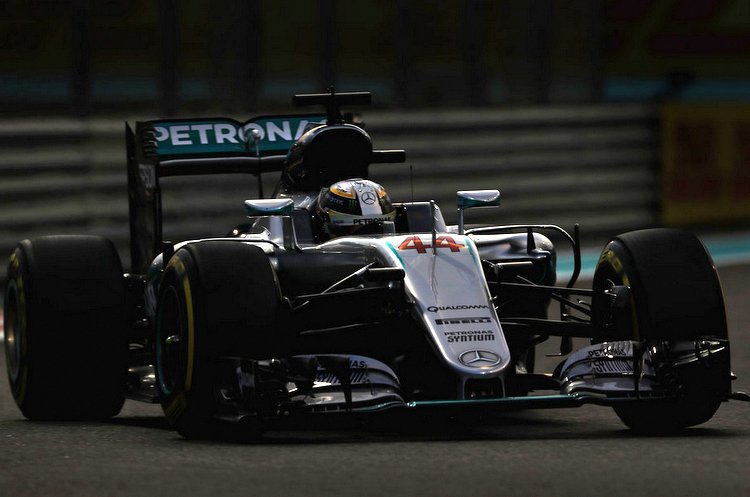 The Briton, 12 points behind the championship favourite going into the final race, lapped the Yas Marina circuit with a quickest time of one minute 42.869 seconds in the early afternoon, when he also had a harmless spin.

The triple world champion then clocked 1:40.861 in the floodlit evening practice.

Rosberg, who need only finish in the top three on Sunday to be sure of his first championship after being beaten in the last two years by Hamilton, was second in both sessions – 0.374 slower in the first and 0.079 off in the second.

Hamilton reported a strange feeling with the gearbox in the evening session but Mercedes said it was one used only on Fridays and of no significance for the race.

The Red Bulls of Dutch teenager Max Verstappen and Australian Daniel Ricciardo, who could play a major role in deciding the title outcome by getting between the Mercedes drivers, were close behind in third and fourth in the first session.

Verstappen was fourth after dark, with Ferrari’s Sebastian Vettel third despite pulling over 10 minutes from the end.

“I think I have a gearbox failure,” said the German.

Hamilton, who has to finish in the top three to even have a chance of becoming Britain’s first four-times champion, and Rosberg have each won nine races this season.

A collision between the two in the day-to-night race, as happened in Spain in May, would instantly hand the championship to Rosberg, although both have played down the chances of that scenario happening.

“It’s going to be a weekend like any other where I’m going to go for the race win and do what it takes to get that,” Rosberg told reporters on Thursday.

He added that his driving would be “within the limits of what’s acceptable, of course.”

Although the underdog, Hamilton has won the last three races and can count on strong support judging from the banners around the circuit.

Brazilian Felipe Massa, preparing for his 250th and last race, was ninth and 10th fastest for Williams while Britain’s 2009 world champion Jenson Button was 12th on the timesheets for McLaren. Button’s car required a power unit change following a troubled afternoon session.