Hakkinen: Without Dennis I wouldn’t be twice F1 world champion 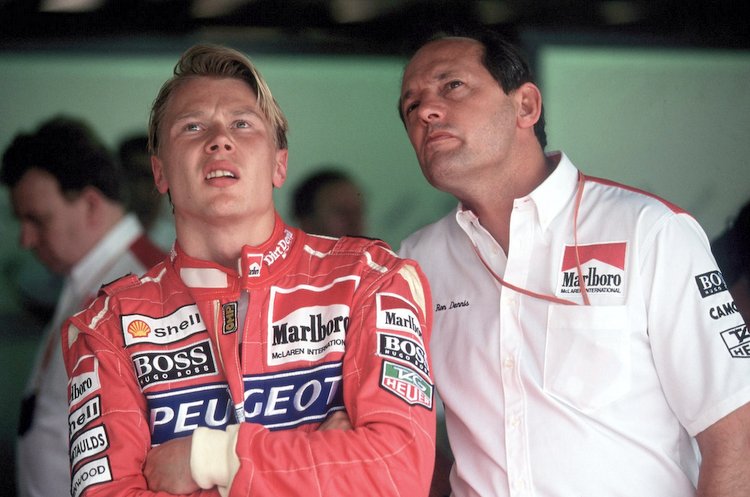 Mika Hakkinen is adamant that without Ron Dennis he would not have been double Formula 1 world champion and is saddened by the departure from McLaren of the man that turned it into the second most successful team in the history of the sport.

Speaking during a business conference in Abu Dhabi, ahead of the decisive Formula 1 season finale in the city, Hakkinen said, “I had a fantastic time [at McLaren]. Without him, I wouldn’t have been twice a F1 world champion. He was a very tough leader in a team for the drivers. He worked me very hard and my teammates.”

“And working hard also has to be very constructive. Ron was able to organise this very well. I believe he’s a great leader,” added the Finn who raced for Dennis-led McLaren from 1993 to  2001, winning back-to-back world titles in 1998 and 1999.

Dennis was forced to quit after being ousted by fellow shareholders, relinquishing his position as chairman and chief executive of McLaren Group.

“I think Ron will be very disappointed for sure,” said Hakkinen.  “He’s been working very hard leading the McLaren team and he knows that he is able to bring success for them.”

“It’s like you’re going up the elevator and somebody pushes the stop button and says: Okay, jump out and we’ll continue going higher. It’s a horrible feeling for him and I’m sure he’s not happy about it.”

After a sepll running his Project 4 Formula 2 team, Dennis joined the Teddy Mayer led McLaren team in 1980, before taking full control in 1981. Thereafter he led the team to several periods of F1 domination and transformed them into the most successful outfit in history, second only to Ferrari.

“I know that Ron has a lot of business which motivates him enormously, but there’s no doubt about it, Formula 1 is an unbelievable sport. It keeps you going flat out and [leaving] that for Ron will be a very painful thing.”

“He’s no longer in this kind of situation where the engines are starting and the start will happen on the race track. That’s going to be tough, of course,” added Hakkinen.

The McLaren organisation are actively seeking a new chief for Dennis’ position.

When asked if he was the man to succeed Dennis as McLaren chief, Hakkinen chuckled, “No, not at all. I’m busy enough and it’s not my thing. But generations change and people change and think a little bit differently these days.”

Hakkinen is part of McLaren folklore, contributing massively to its legacy. In 1993 Dennis drafted a hitherto unproven Finn into the McLaren team from Lotus, who were in a steep decline at that point.

With Ayrton Senna leading the team that year partnered by Michael Andretti. The American Indycar star proved to be out of his depth in Formula 1 and after 13 races was ditched by McLaren.

Hakkinen was given the seat and made his McLaren debut at the 1993 Portuguese Grand Prix, cheekily out-qualifying Senna but crashed in the race.

At the next race, in Japan, Hakkinen finished third behind winner Senna and Williams’ Alain Prost in second. With Senna off to Williams in 1994, Hakkinen became McLaren team leader – and the rest is now history.