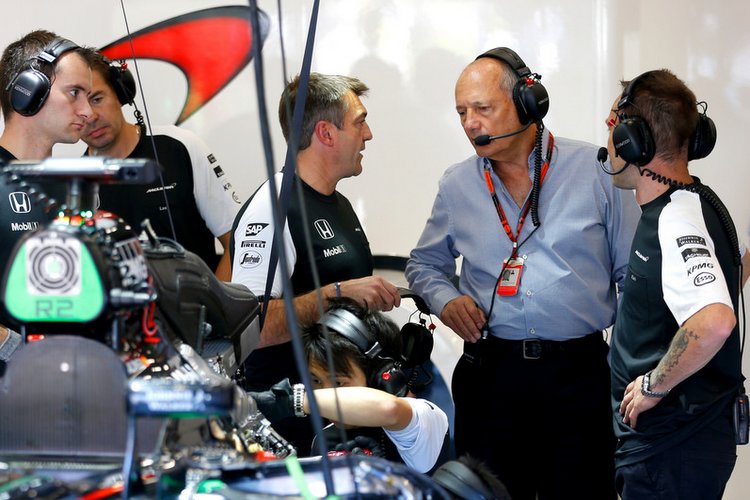 As has been widely reported, Ron Dennis has been forced to stand down as Chairman and Chief Executive of McLaren, bringing to an end his 35-year involvement with the Formula One team.

The sport has changed immeasurably since the 1980’s and indeed these days it is more a business, with sporting connections in a two hour window on a Sunday afternoon. With it Formula One has become increasingly corporate with the huge sums and stakes involved.

Ron Dennis, or RD as he is known to many of the people who worked for him, is a legendary figure in Formula One circles and synonymous with the McLaren team, steering them to enormous success and building the McLaren Technology Group into the highly successful multi million, or even billion, dollar group of companies it has now become.

The secret of its success was Ron’s far sighted vision and relentless determination. For many who worked for the team in the glory years of the eighties and nineties, you didn’t just work for McLaren, you worked for RD. He was a tough operator no doubt, but also compassionate to his staff who loyally followed the dream and the success that was achieved.

Like many of my fellow McLaren Old Boys and Girls, I am immensely proud to look back on the chapter of my life with McLaren. Not only did I enjoy the time, but also learnt a tremendous amount from RD. Whenever encountering an obstacle or problem, the default setting has became, how would RD resolve this!

I joined McLaren in 1985 as the 91st employee and the third member of the marketing department. I had applied for the job of Account Handler through an advert in Autosport magazine. Even though it would be my dream job, I never really expected to be the one chosen from the hundreds of applicants. My interview was in Ron’s office and he sat behind a large oak L shaped spotless desk.

The interview conversation must have taken around twenty minutes, but I must have been in his office for over an hour as he continued to take telephone calls. As a motorsport enthusiast I had to pinch myself that I was actually there and listening to his conversations with the great and the good of motorsport.

Much to my amazement I got the job. For the first few weeks after joining the company RD checked everything before it was allowed to go out. However once he had the confidence in you, the level of responsibility accelerated to an awesome level as I was given responsibility for special projects working closely with Ron in what was the pioneering days of F1 marketing, which McLaren were so good at.

One of my early jobs was being entrusted by RD to find a furniture manufacturer to fit out the new office and factory facility which McLaren was going to move into in Woking Business Park. Having short listed this to three potential companies, Ron and I visited them each, before settling for one, which was a German based company, who had a subsidiary in London. With their Managing Director rubbing his hands together and salivating about the scale of the deal, Ron went for the sucker punch.

Yes McLaren would buy the furniture from the UK based company, but in return RD wanted the German mother company to be a sponsor. After further meetings and trips to Germany the deal with Voko was agreed, which included hospitality for a party of eighty of their top clients each year at a Grand Prix weekend. The first event was the 1986 British Grand Prix at Brands Hatch, which included helicopter shuttles ferrying eighty people from Leeds Castle in Kent.

However having got a taste for the Grand Prix lifestyle the company wanted to be more ambitious and go to the glamorous Monaco Grand Prix. The challenge was finding 40 or more rooms in one hotel in Monaco, when most hotels had a five to seven night minimum stay, regardless of how many nights you actually stayed. This is where Ron and McLaren where at their lateral thinking best.

Instead of staying in a hotel, why not bring in a floating one, which could be moored in the harbour. So on route to a Grand Prix on the corporate jet, we made a flying visit to Ibiza for an inspection of the 56 berth luxury yacht Sea Goddess, which we chartered from Cunard for a quarter of a million pounds sterling, to be exactly that, our floating hotel.

Yet despite the sheer scale of the Sea Goddess event, the aspect that stands out most in my mind is being faced with the challenge of having to accommodate the German pianist Justus Franz, a guest of Hugo Boss, who required a Steinway grand piano on the deck.

The problem being that the ship’s Steinway piano was below deck by the restaurant. Faced with this obstacle, it reached the extreme scenario of Ron betting me $1,000 that he could get another one on board, as we went through the feasibility scenario of flying one in by helicopter over the crowded harbour!

When TAG bought the watch company Heuer, Ron was very involved and I accompanied him to board meetings as the company and product line was restructured and new advertising, promotions and sponsorships were developed. This included the Route du Rhum transatlantic yacht race and the downhill world skiing championship.

McLaren also pioneered VIP hospitality for its guests at Grands Prix with a specially designed interior which was introduced in 1989 in Germany. Ron was very much involved in the aesthetics details of the design and at every race would always make a inspection tour.

With his meticulous attention to detail, even though we would get ninety nine out of a hundred details right, you knew that he would always find the one thing wrong. Knowing this, in the end we would deliberately keep one thing for him to comment on, so that he would go away happy in the knowledge he had given his input!

In Mexico I remember going to a dinner with the team management, Alain Prost and Ayrton Senna where Alain bet Ron $1,000 to eat a whole bowl of hot chillies. Never one to turn down a bet, RD duly accepted. Whilst he went a colour similar to the Marlboro red, drank numerous pints of water and went very quiet for a quite a long time, he duly demolished the whole bowl!

And then there was the famous launch of the West McLaren Mercedes team at Alexandra Palace in London. After looking at a myriad of ideas, almost as a throw away line, someone suggested the Spice Girls! After the initial burst of laughter, Ron thought this to be a good idea which was quickly followed up with one of the agencies who worked with one of the soft drinks companies that was associated with the band. Ron was in his element negotiating with Simon Fuller, the girls manager.

The event was ambitious to say the least, with multiple happenings, be that VIPs, media, public, staging, presentation, plus the stars themselves, which apart from the Spice Girls and Jamiroquai, included McLaren’s two star drivers Mika Hakkinen and David Coulthard.

The Spice Girls had a restriction on photographs in their contract, which as you can imagine was a challenge for a media event! Photographs could only be taken at certain parts of the act with the car reveal and then the media had to leave. This wasn’t helped in the afternoon by an errant photographer who somehow gained access to the Spice Girls rehearsal.

This very nearly ended in a walk out, which was narrowly avoided thanks to Mr Dennis’ considerable negotiating skills. However I am sure you can appreciate my cold sense of terror when learning of the situation and having to inform Ron that “I think we have a bit of a problem!”

The last major project I worked on with RD was at the USA Grand Prix in Indianapolis. Trying to educate the guests about Formula One was a challenge, especially as the Indy cars, which normally raced on the ovals, looked very similar and actually had a faster top speed.

Therefore we had to emphasise the technology and sophistication of F1 and we did this through putting on a show for the sponsors which took place downtown in the Artsgarden, which is a huge glass auditorium that straddles two of the main roads.

The first year in 2000, through a friend of Ron’s we used the hugely impressive Cirque du Soleil who astounded the audience with their breathtaking acts, to illustrate such aspects as precision and teamwork.

The second year had a much more sombre atmosphere as the race took place two weeks after the horrendous tragedy of the collapsing of the Twin Towers in New York on September 11th. For many days there was intense speculation as to whether the race would actually take place, especially as many companies in the immediate aftermath forbade their employees to travel by airplane.

In the end the decision was taken that to cancel the race would actually be giving in to the wishes of the terrorists, so the race did take place, but to a much reduced audience. This to had an impact on our event at the Artsgarden.

We still went ahead and Ron gave a very moving welcome speech, describing the impact it had on him watching the demolition of the Twin Towers on TV and comparing the powerful emotion he also felt when seen the first man on the moon – one negative and one positive.

Ron, with his high standards was never a man to give praise freely, however after the event at the Artsgarden, I got the closest thing to praise.

“You know what, we have had two evenings and no f**k ups! A lot of people have been singing your praises, so well done!”

I left McLaren in 2002, having never made the transition to the Technology Centre and I have only seen Ron once since to speak to, which was at the Singapore Grand Prix.

Since 2002 McLaren have only won the World Championship once more and the media, including social media, have endlessly commented on their current lack of performance.

This is now, but I cherish the memories back then, of working with the best, when they were the best!

Inside Line by Peter Burns