Nasr points in Brazil worth $20-million to Sauber 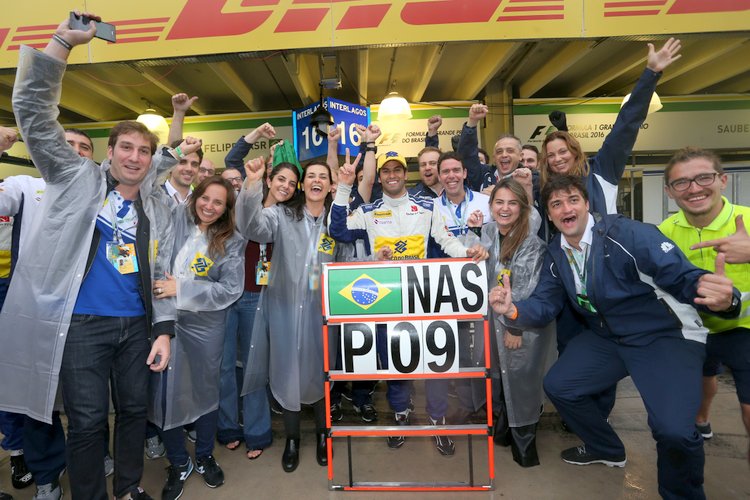 Felipe Nasr’s relationship with Sauber has run hot and cold for most of this season and before the race at Interlagos it was decidedly cool as the he openly sought to ply his trade elsewhere, but the Brazilian Grand Prix may have changed that.

Nasr finished ninth in an action packed and challenging race, scoring the Swiss team’s first points of the season and saw them leap frog ahead of the Manor team by one point.

That one point could be worth an extra $20 million dollars in prize money for Sauber, and signifies a huge loss for Manor unless they can score points at the season finale in Abu Dhabi – an unlikely scenario.

Nasr, who was linked with Force India and Renault before those teams confirmed their 2017 drivers, may be out of a drive next season unless he can come to an agreement with Sauber for another season. His performance and the subsequent reward will have done his shares no harm with the team.

Speaking to journalists after the race, Nasr said, “This is great for the team. It’s a dream to score my first points of the season in Brazil. It was the first time I raced in the rain at Interlagos. I want to continue in Formula 1 next year and I know I’m capable of it. Results always help.”

“I said throughout the weekend that I was focused on what was happening on the track and I would think about the future later. After the race I talked with Monisha by phone, she was very pleased. More than anyone, she knows the difficulties we faces this season. I’m relieved to have scored points.”

Nasr also took the opportunity to respond to critics who doubted his ability, after scoring 27 points in 2015, he had a problem packed 2016 with a team who not long ago teetered on closure.

“People judge things too quickly. When the year is bad, it is difficult to show results. So when the chance appears, you need to make the most of it. I want to continue in F1 next year and I know I’m capable of it,” added the Brazilian.

Bernie Ecclestone is keen to keep Nasr in Formula 1, because without him there will be no Brazilian driver on the grid

The F1 supremo admitted that he is helping Nasr, “I will continue to help, but I do not have the ability to impose a driver on a team. I really want to see him on the grid in 2017.”