Nasr: I have no words to say how happy I am 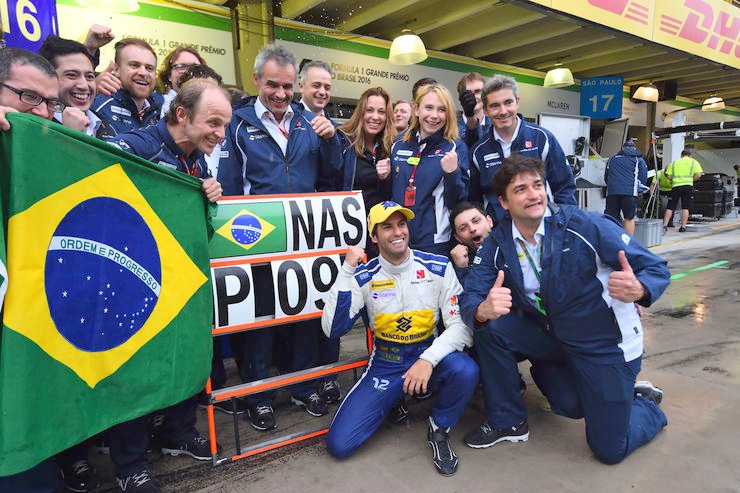 Brazilian Felipe Nasr had hoped his home race would provide a breakthrough for struggling Sauber and he was proven right on Sunday when he scored the Swiss team’s first points of the season.

Nasr’s ninth place at a wet Interlagos brought only two points but they could be worth millions of dollars once the Formula One championship is finished by putting Sauber ahead of tail-end rivals Manor.

“I have no words to say how happy I am at the moment,” declared Nasr, whose future remains undecided with his team yet to confirm their 2017 lineup.

“When I saw the weather forecast for today, I knew it could be an opportunity. The opportunity came, and I was ready to go for it,” added the Brazilian, who had started on the back row of the grid.

“It was a tricky race, as the track conditions were very difficult at some points. In the end it was just an incredible feeling when I saw the fans in the grandstands cheering for me after the chequered flag.”

Sauber now have two points to Manor’s one with only the Abu Dhabi grand prix to come at the end of the month. And that race, usually run under clear skies, has proved far more predictable than Brazil.

Manor’s racing director Dave Ryan recognised Nasr’s success was a bitter blow for his team, who had been ahead of Sauber since July when Germany’s Pascal Wehrlein finished 10th in Austria.

“It wasn’t ideal,” he grimaced. “But all credit to Nasr, he drive a superb race.

“We did as good as we could…it was close. We had two cars in the points for quite a long time and were genuinely part of the race. We were on top of it right up until that last re-start.”

The race was stopped twice and had five safety car interludes as crashes and conditions took their toll.