Lewis Hamilton maintained his edge over Mercedes teammate and title rival Nico Rosberg, by claiming pole position for the Brazilian Grand Prix and setting the stage for an intriguing battle, which will end with the German being world champion or the title fight going to the final round in Abu Dhabi.

Hamilton enjoyed the upper hand throughout Friday’s free practice session, but appeared to lose the momentum in FP3 with a scrappy showing in the morning session. But when it mattered the Briton had the ammunition to keep Rosberg at bay by a tenth of a second.

His best lap of 1:10.736 was 0.102 of a second better than Rosberg’s effort, as they the Silver Arrows continued to enjoy over half second advantage over their rivals in qualifying trim as they have throughout this season.

Hamilton said afterwards, “Honestly I felt quite comfortable in qualifying as I have all weekend. Nico’s been going quicker and quicker but I’ve generally had it covered. This is the best I could have hoped for coming to Brazil. It’s always a track I’ve struggled at so I’m glad to be at the front.”

Rosberg was clearly not perturbed, “It was exciting. It was very close. Lewis was marginally quicker in the end. Pole isn’t always the guy who wins the race so I’m still optimistic for tomorrow.”

A win for Rosberg on race day will ensure that he is crowned 2016 Formula 1 world champion on the Interlagos podium. If Hamilton wins the title will be decided at the season finale.

Best of the rest on the day was Ferrari driver Kimi Raikkonen who surprised the paddock with a smart final run which was good enough for third on the grid.

Raikkonen said, “I struggled the whole qualifying. To be honest, the last lap was pretty average but it was enough for third, the Mercedes are bit a too far.”

A mere 0.081 of a second behind the veteran was Red Bull teenager Max Verstappen with the fourth fastest time with Sebastian Vettel in the Ferrari a mere 100th of a second behind and Daniel Ricciardo in sixth in the other Red Bull.

Romain Grosjean provided another surprise by qualifying seventh fastest, his confidence apparently back with a new brand brake system bolted onto his Haas.

Up next were the Force India pair of Nico Hulkenberg and Sergio Perez who ended the session eighth and ninth respectively, with Fernando Alonso doing well to make it into Q3 for McLaren. He will start from tenth.

His teammate Jenson Button was well off his pace, failing to make it out of Q1 and will start what may be his last Brazilian Grand Prix from 17th.

Williams, who showed good pace on Friday, went AWOL in qualifying with Valtteri Bottas 11th fastest and Felipe Massa set to start his final home grand prix from 13th on the grid. 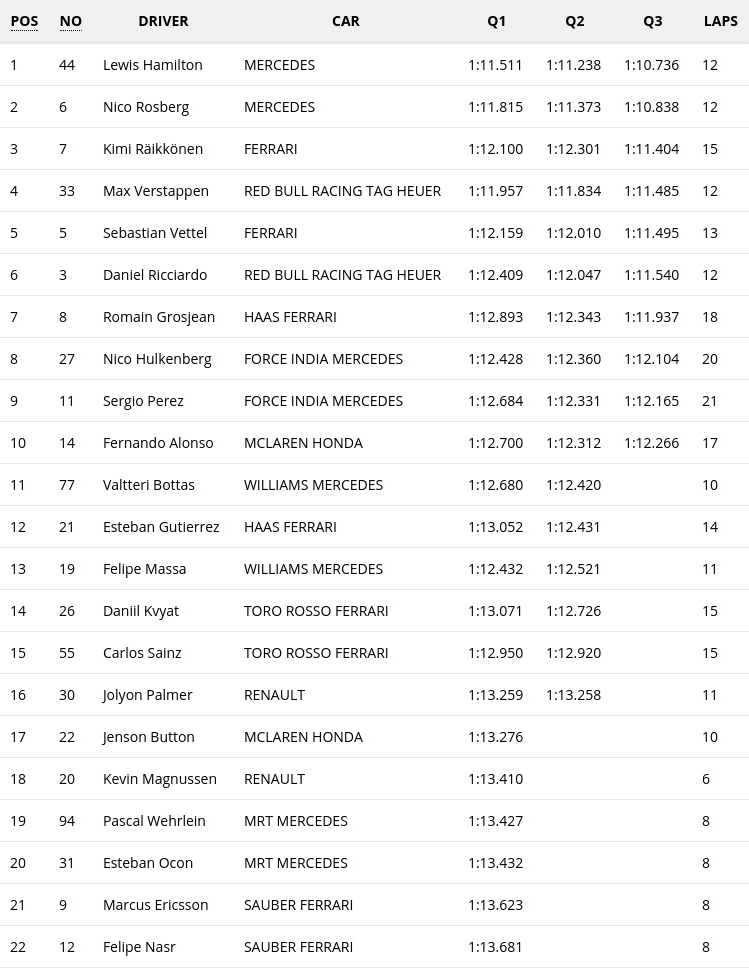