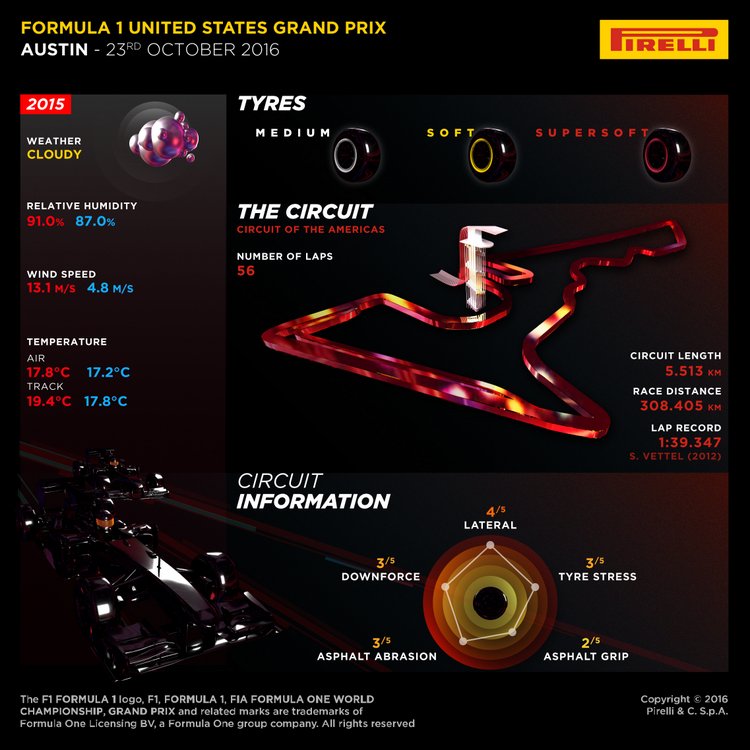 After a couple of races with the hard compound nominated, P Zero White medium, P Zero Yellow soft and P Zero Red supersoft is the choice for the Circuit of the Americas. Last year, torrential rain meant that many sessions were cancelled and the slicks were not used until race day.

This year, the teams will be hoping for a more conventional weekend with enough dry running to form a full picture of how the three nominated compounds interact with the Texan circuit.

However, past experience has certainly shown that a wide range of conditions is always possible: another factor that the teams will have to contend with at this technically varied and universally popular grand prix.

How was it a year ago?

There was no dry running until the race, with the grid based on Q2 times. Lewis Hamilton won the 56-lap race: starting on intermediates then switching to soft on laps 18 and 43.
Best alternative strategy: Sebastian Vettel was on the podium with a three-stop strategy from 13th on the grid, using the medium tyre as well, in a race that was affected by two safety cars.

“The significance of the United States both as a race and a market for us goes without saying, especially with the opening of our first P Zero World store in Los Angeles earlier this year. The 2015 grand prix was particularly challenging because of the weather, meaning that the teams are lacking recent data on the slick compounds at Austin. We’re also bringing the supersoft to the track for the very first time. As a result, the free practice sessions in particular will be extremely important this year, with the optimal strategy yet to be defined.”

Damage caused by the hurricane that affected the circuit after last year’s race has been fixed. Apart from that, there are no changes to the circuit, surface or infrastructure this year.
Nico Rosberg got to try Pirelli’s 2017 wide tyres for the first time at the test with a Mercedes mule car in Barcelona last week, which was seriously affected by rain and cool temperatures. Lewis Hamilton had to skip the test due to a foot injury.
The testing programme then continued with Red Bull in Abu Dhabi, again using modified cars.