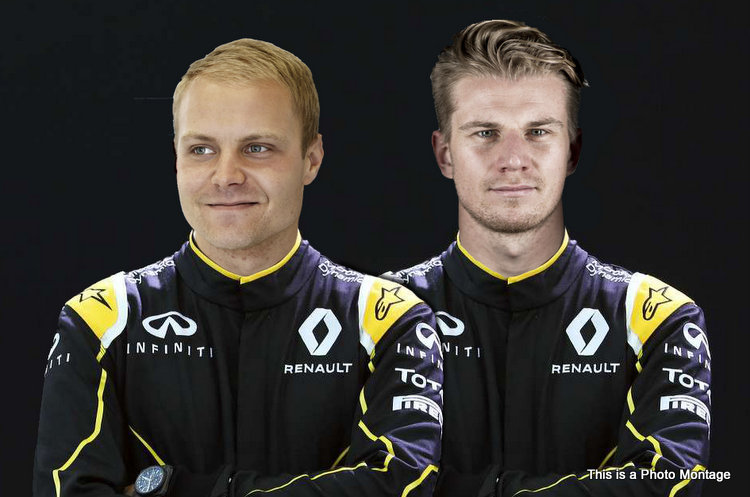 With Nico Hulkenberg all but confirmed to join Renault for a two or three year deal starting in 2017, it has now emerged that the French outfit is working hard to secure the services of Valtteri Bottas from Williams.

Although Bottas is tipped to stay at Williams, the Grove outfit want a long term contrcat while Bottas wants a one year deal and this sticking point may trigger his move to Renault who are desperate to sign two experienced drivers to spearhead their programme next season.

According to Auto Motor und Sport, Renault have presented Bottas with a long term deal which as a works team is an attractive proposition.

Bottas and Hulkenberg are the most effective and experienced pairing still available, although neither has won a grand prix as yet.

While Force India are publicly claiming that Hulkenberg would be foolish to leavethe Silvberstone based team, behind closed doors they are already shopping for a replacement to partner Sergio Perez next year.

Candidates with money include the likes of Felipe Nasr, Esteban Gutierrez, Jolyon Palmer as well as  the Mercedes-backed duo of Pascal Wehrlein and Esteban Ocon.

Sporting boss Otmar Szafnauer told Auto Motor und Sport, “It would be foolish to force a driver to drive for us if he doesn’t want to,But I think Nico would be ill advised to go. We are fourth in the championship — and where is Renault?”

For Hulkenberg a move to a works team is a no brainer, despite the fact that Renault are rebuilding. They have pedigree and a to be part of a two or three year plan with a factory outfit is a step up for the German whose career at Force India has stagnated.

Bottas on the other hand is keen for a one year deal as he is said to have an option to join Ferrari when fellow Finn Kimi Raikkonen departs at the end of 2017.

However if he is forced to choose between Williams and Renault, he too may opt for the latter for the same reasons Hulkenberg has chosen to do so.