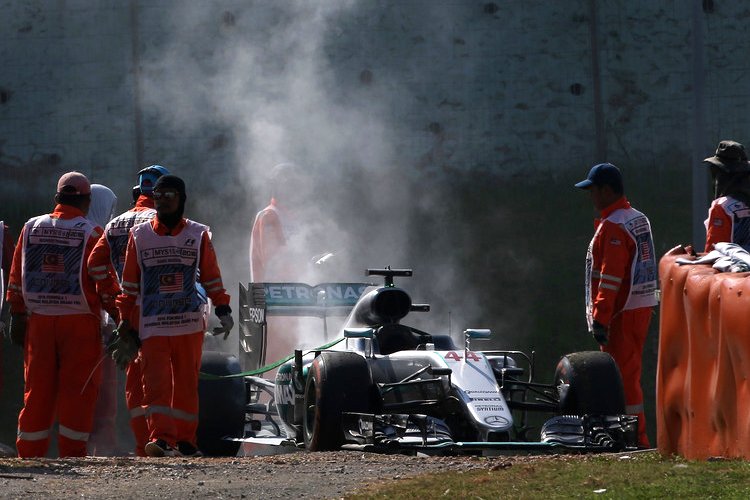 Mercedes management are mending the damage caused by Lewis Hamilton’s DNF due to an engine blow-up while he led the Malaysian Grand Prix, and the subsequent provocative remarks he made in the heat of the moment whereby he hinted at a conspiracy directed against his title campaign.

Team principal Toto Wolff was almost lost for words after leader Hamilton’s engine exploded 15 laps from victory in Malaysia, instead it was a DNF while his teammate and title rival Nico Rosberg recovered from a first lap melee to finish third and extend the lead in the title race to 23 points.

Wolff admitted he did not have the answer. “This is a mechanical sport, with so much technology, but sometimes you get blindsided by situations with no rational explanation. It’s a freaky coincidence.”

“Our guys will get to the bottom of what happened and learn from it. But I want to focus on how Lewis responded in the aftermath. We let him down today and we are beating up ourselves about it.”

“It’s hard to know how to sum up a day like today,” Wolff said. “I just have no words for what happened to Lewis. We feel his pain.”

Hamilton was close to tears after the dramatic retirement dealt a severe blow to his chances of winning a third drivers’ championship in a row.

Immediately after the race, won by Red Bull’s Daniel Ricciardo, Hamilton lashed out at his team, accusing them of favouring their German driver Rosberg.

“My question is to Mercedes: we have so many engines made for drivers, but mine are the only ones failing this year,” Hamilton declared to the assembled media in the Sepang paddock.

Hamilton’s emotional outburst, said Wolff, was in the heat of the moment. But he praised his driver for afterwards making peace with the team and refocusing on the next race in Japan.