Hamilton: It is like I am playing with a rattlesnake. 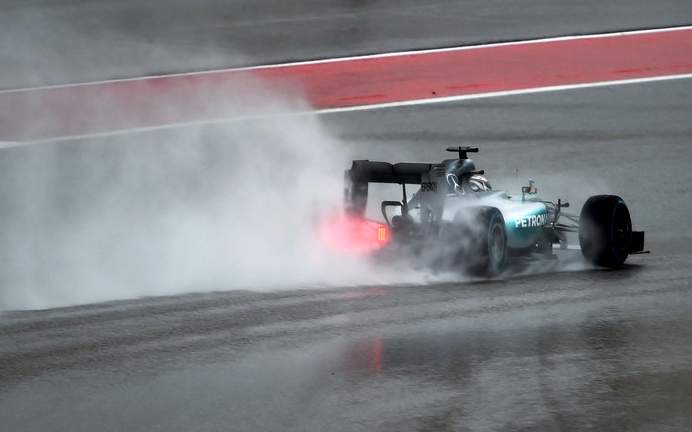 Lewis Hamilton entertained the fans with a waving appearance on the pit-wall in the rain and then compared racing in severe wet conditions to playing with a rattlesnake on Saturday.

As storm clouds continued to deliver a downpour over the Circuit of the Americas -– forcing three successive delays to qualifying for the United States Grand Prix -– the defending two-time champion grabbed an umbrella and surprised the drenched spectators.

The 30-year-old Briton did little to suggest he was trying to emulate Hollywood star Gene Kelly, but his gesture was appreciated and immediately drew an ad-hoc media audience.

“It’s real shame for all these people here in the rain, but you just cant mess with Mother Nature,” Hamilton told reporters.

Hamilton’s example led to more outbreaks of spontaneous pit lane fun with teams building boat-like creations to tackle the puddles, some practicing their football juggling skills and other drivers waltzing and jiving.

Red Bull duo, Daniel Ricciardo and Daniil Kvyat joining in what looked like a slow rock and roll dance to the fans’ delight.

Asked what it was like to deliver such speed and precision in treacherous conditions, Hamilton explained: “You know it is snapping all the time and I am feeling ‘whoooh’ this is great and it is like I am playing with a rattlesnake.

“You know it is like how close you can get to it before it bites, so you are driving right to the edge, before it snaps away from you. It is an amazing feeling.”

Hamilton, who can wrap up his third world title with a third win in four visits to Texas in Sunday’s race, said he felt no stress in advance of the showdown.

“Obviously, I care about it, I have been working all my life for this, and if it happens here it will be amazing, but I know I have a lot of great competition,” said the Mercedes star.

“But my goal is to cross the line as champion in Abu Dhabi and I haven’t been thinking of doing this with four races to go. I just want to win it by the end of the year.”

In a supremely relaxed mood, Hamilton larked with television crews and rival teams in the teeming rain and dismissed thoughts of breaking records and emulating great British heroes.

“I’ve never been one to chase titles and wins in terms of the records,” he said. “I am not always looking at the other guys like that.”

“I am completely different, but I respect everyone’s achievements and honestly just feel it is awesome to be doing something that Ayrton Senna achieved.

“I don’t care about the rest because it was only Ayrton for me as a driver, when I was a kid. It would be really neat to equal and join the other great British drivers -– it is great to have most wins and to be putting some stakes down with my name on them.

“I feel very proud like that and for my family. I hope that there will be other great British drivers and I am sure there will be because we seem to breed them to be successful.”