The fine art of Formula 1 by John Cheall 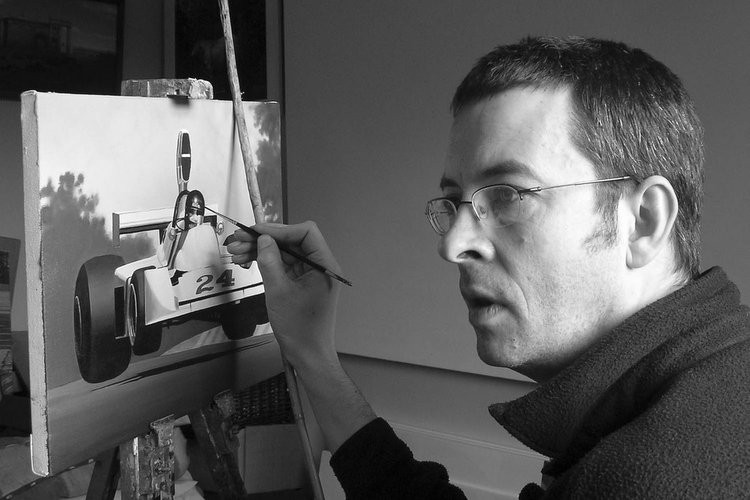 For most of us our passion for Formula 1 is restricted to watching the sport on TV, perhaps articulating ourselves on one of the numerous forums or even the grandprix247.com or a fan page on Facebook.

Others have gifts, such as a natural eye, and pursue photography of motorsport, or the gift of words and write about the sport. Then there are those – a very special and rare breed, born with a special and priceless talent, who have the gift of art and are able to beautifully portray their passion on to canvas.

John Cheall is such, a gifted artist who uses his superb talent to portray his vision for motorsport, particularly F1, into the most enthralling artworks. We “discovered” his work languishing on a modest site on the web and decided to feature his art on grandprix247.com as it ranks among the best we have seen – we ran a similat story in the yallaf1.com days….

We delved into his passion which no doubt will inspire others as it has inspired us. But maybe most importantly we salute John’s genius at portraying the sport we love in such a spectacular and enduring manner. His paintings prove that racing is in his blood…

The first obvious question was, how did it all begin?
John: “My obsession with grand prix cars began in the 1976 season, the dramatic battle between Hunt and Lauda, I was eleven years old, it was only possible to follow F1 on the radio or via the reports of ‘DSJ’ in Motorsport Magazine – th late great motorsport journalist Denis Jenkinson. I was a fan of Lauda and liked his patient, rational, race winning approach. I was much affected by his crash at the Nurburgring and could not believe the pictures of his bandaged face in the papers next day . He became a hero to me for making such a great recovery and comeback. Prost may be known as ‘the prof’ but it was from Lauda that he learnt his racecraft.”

And the merging of your talent for art and motorsport?
John: “My nextdoor neighbour was an art teacher at our comprehensive school. I was friends with his son who had an enormous Scalextric set, we could lay out Spa or Monza to fill the garden, or weaving in and out the easels in the painting studio. Racing cars and oil paint, a connection was established then. Our nearest circuit was Croft Autodrome, my dad took us there a few times to watch a large program of racing from side-cars to Formula Ford and Formula Libre. The smell of fried onions still takes me back. Once, in 1977 James Hunt was special guest, my brother queued for his autograph and we gawped at his championship winning Mclaren M23 parked in the paddock. In the course of my studies I left my hometown and went off to Loughborough College of Art to study fine art, graduating in 1990, I cleared my debts working as a street-artist then I began to make a living as a painter of landscapes. I have since done paintings for the British Consulate in Berlin, Morrisons PLC, Payne Worldwide, Rampton and Addenbrookes hospitals and numerous individuals notably a tank-veteran of the Normandy landings. I am also recognised in the Nottinghamshire volume of the Public Catalogue Foundation which details all the paintings held in public buildings in Britain. There have been good years and bad years, schmoozing galleries, falling in and out of favour, closing galleries etcetera, it’s a long way to the top.” 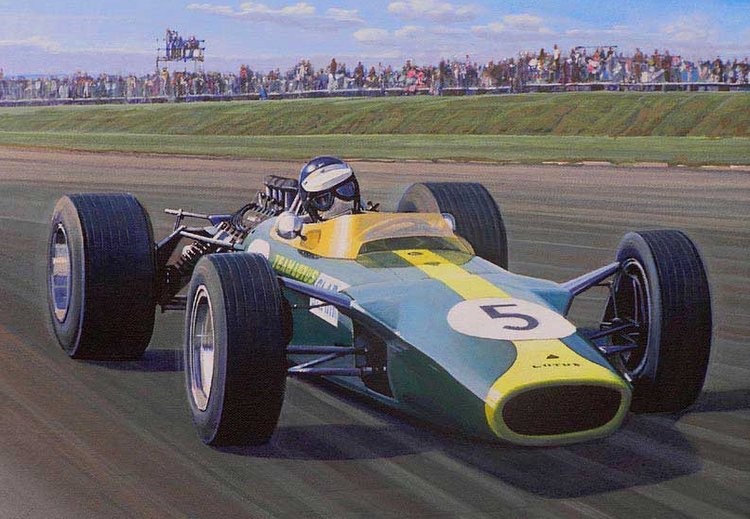 When did you start painting Formula 1 scenes?
John: “I have continued to follow motorsport throughout but it is only a few years ago that I began to paint F1 cars. After painting a few tanks for my friend the WW2 veteran I found that I enjoyed the discipline of painting well-defined objects after years of trying to capture atmospheres and moods. Just for my own amusement I began to paint small pictures of F1 cars in watercolour. I sold one which is always encouraging so I started painting them with greater solidity in oils. It was fun to use some of the bright colours of the F1 palette and a challenge to capture some of the luminous pigments they use.”

Tell us why paintings tend to have an awe factor stronger than a photograph?
John: “Anyone who has seen my work up close will tell you that the pigments of the paint make an image far stronger than anything possible with the printed photograph. There is a huge range of tone and colour in oils, you can create a very convincing illusion of depth as if the painted subject is almost three dimensional, coming at you out of the flat canvas. It is not my aim to interpret the subject overmuch but rather to enhance it, I might exaggerate colour, tone and texture but I want a realistic image. I am a follower of an earlier tradition when painters were artisans making well-crafted illusions in oil-paint rather than trying to force a unique signature style. My influences range from Vermeer through Caspar David Freidrich, JMW Turner, John Martin and the Pre-Raphaelites to the Photo-realists.” 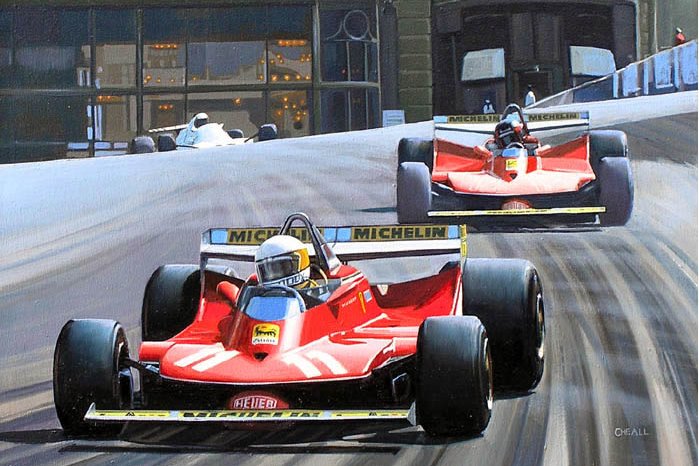 Much of your work is of bygone eras of Formula 1. Why is this?
John: “Initially I concentrated on paintings of the 1970s era, there was something more creative about those cars, not uniformly sculpted by the logic of the wind tunnel but created by whimsical boffins with varying philosophies of design, some just plain ridiculous; the various six-wheelers, the Ligier ‘tea-pot’. There was an art to the cars then but I still appreciate the pure scientific lines of the modern cars and I am carefull to respect their shapes in my paintings. The return to plain slick tyres last year prompted me to tackle the new generation of cars, it was no fun painting grooved tyres with all those parallel elipses! I rolled out some of these car paintings for sale on ebay and there was immediate interest, just about all of them sold, some of them for surprising amounts.”

Tell us about your interest in Formula 1?
John: “Formula 1 always interests me whatever the result and sometimes such as at Melbourne last month it excites and amuses me as much as ever. I find myself rooting for Hamilton, he has the necessary hunger and aggression and even as a rookie deferred to nobody, that’s what makes a champion. I like to see bounders who don’t know their place, new guys working their way up on merit, coming in and upsetting the old heirarchy. The show still needs improving though, there have been times when even I have nodded off mid-race. It is often disappointing to see so many resources spent on changing the cars when in many cases it is the circuits that need improving to allow overtaking.”

Did you have the need for speed as a youth? Were you going to be a policeman, a fireman, and astronaut or a racing driver?
John: “Of course I had boyish ambitions to be a racing-driver but it was a world always out of reach, I soon realised only a tiny minority ever get the opportunity, besides I didn’t learn to drive until I was in my 30s. But it is possible now to get some insight into the racing experience using simulation software not much different from that which the teams use. I race Rfactor online in the ‘Legends-League’, it really is a heart-poundingly intense experience lining up on the grid with a full-field of human opponents. It teaches you the real meaning of concentration, consistency, frustration and even jubilation, we raced a full hour at the old Nurburgring last week, magnificent. As welI as being fun I find it a useful part of the creative process, I am probably not now going to get the chance to experience a real race car but this is the nearest thing and getting more immersive all the time.”

Your plans for the future?
John: “It is early days for my Formula 1 pictures, there is much to learn and new perspectives and viewpoints to explore. I have some new ideas for the next few but first I have a queue of landscape commissions to complete. I am currently working on a version of Heironymous Bosch’s ‘Garden of Earthly Delights’ for a customer. Then it would be great to get some motor racing commissions and maybe tackle something larger scale.”