Lewis Hamilton took his seventh pole in eight races, taking the top spot on the grid for the Austrian Grand Prix ahead of Mercedes team-mate Nico Rosberg, with both drivers bizarrely spinning off during their final runs. Third place in the session went to Ferrari’s Sebastian Vettel.

Q1 began in somewhat uncertain fashion with the first laps being conducted on the intermediate tyre on a track that was drying out after the rain of FP3. In these conditions it was Toro Rosso that set the pace, with Carlos Sainz topping the early order, with team-mate Max Verstappen slotting into second place.

Sauber’s Felipe Nasr then moved to slick super soft tyres after seven minutes but his first flyer put him seventh and 1.7s off the pace. Williams’ Valtteri Bottas and Felipe Massa, meanwhile opted for soft tyres.

The conditions were changing by the minute, however, as a dry line began to form around the track and when the pair jumped to the top of the timesheet a global move to slick tyres was triggered, with supersofts being the choice after Nasr claimed P1 with a lap of 1:15.623.

It meant that the final minutes of the track were characterised by desperate attempts to stake a claim to a Q2 berth and with a minute to go the men in most danger were the Manors or Roberto Merhi and Will Stevens, Red Bull’s Daniil Kvyat, Force India’s Sergio Perez and Nasr, who had plummeted down the order as the track improved.

Also hovering on the brink of elimination was Ferrari’s Kimi Räikkönen and in a major upset, it was the Finn who most obviously failed to improved. By the time the segment ended Räikkönen was mired in P18, his final time of 1:12.867 not being good enough to vault to safety.

Clearly angry and dismayed he retorted over the radio to his team: “How the f*ck did that happen?”

Perez was eliminated in P16 ahead of McLaren’s Jenson Button, who had minutes earlier topped the timesheet. Behind Räikkönen came the two Manors.

At the top of the order was Mercedes’ Nico Rosberg, whose time of 1:10.976 was good enough to edge Sainz by just under two tenths of a second. Ferrari’s Sebastian Vettel was third ahead of Verstappen, with Nico Hulkenberg fifth for Force India.

Q2 saw Le Mans winner Hulkenberg set the early pace with a time of 1:10.207 and the order soon formed up around the German with Verstappen second ahead of Rosberg and Sainz.

Red Bull’s Daniel Ricciardo was finding the going tough though and complained of feeling “something strange on braking”. The issues appeared to affect the Australian’s attempts top progress and he eventually could only manage a best time of 1:10.482, which put him in P14 just over two tenths clear of Fernando Alonso. Both Ricciardo and Alonso are facing grid penalties due to power unit changes. 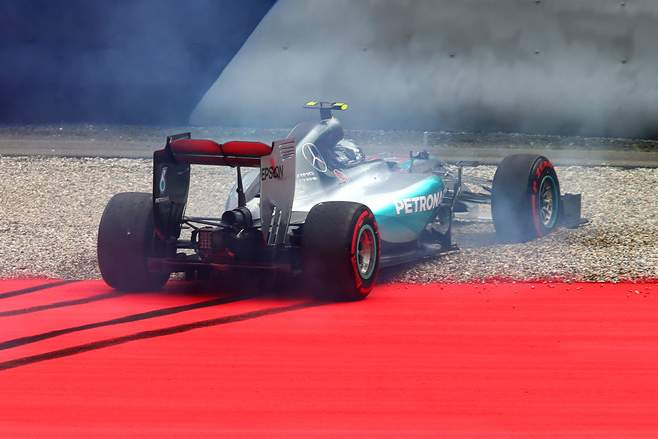 Ricciardo’s Red Bull team-mate, Kvyat, made it through to the final segment, however, his lap of 1:10.187 being good enough, by almost two tenths of a second, to push Lotus’ Pastor Maldonado out of the session. The Venezuelan slotted into P11 ahead of Sauber’s Marcus Ericsson and the unfortunate Sainz, who couldn’t claw his way back into the top 10 despite being something of a pacesetter in the session to that point.

Rosberg again headed the order with a time of 1:08.634, with team-mate Lewis Hamilton taking P2, though almost half a second adrift of the German. Vettel was third 0.758 behind Rosberg, with Bottas fourth for Williams and two tenths further back.

The first runs in Q3 saw Hamilton seize the initiative. His opening laps saw him take provisional pole with a best time of 1:08.455, exactly two tenths quicker than Rosberg. Vettel continued to hold third, this time a tenth ahead of the second Williams of Massa, while Bottas was fifth.

In the end neither Mercedes driver completed their final runs. Hamilton blew his chance of an improvement early in his final run as the back end of his Mercedes snapped out under braking into Turn Two.

Hamilton reflected, “It was quite a difficult qualifying with the track conditions. I was grateful I got my third lap in on the first run in Q3. I was pushing that bit extra on the next run and just locked the rears.”

“I wasn’t too concerned about losing pole at that time because I was trying to get the car going, but obviously afterwards I was thinking: I probably lost it there.”

“Ferrari have really showed some great pace so tomorrow’s going to be a tough race. Every little bit of time will count [in the race],” added Hamilton.

That left the field clear for Rosberg and the German began his run well, setting a personal best in the first sector and then recording a purple, session-best time in sector two. His chance of stealing pole ended, however, when he made a mistake into the final corner and he arrowed off track and into the gravel trap.

Behind them Vettel stayed third ahead of Massa. Bottas, however, was dropped to fifth by a good lap from Hulkenberg. Verstappen was an excellent seventh for Toro Rosso.

Kvyat, who will take a 10-place grid drop for use of a fifth engine, was eighth ahead of Nasr and Lotus’ Romain Grosjean who did not set a time during Q3.

Vettel said afterwards, “They were a bit too quick. We tried everything and we looked good generally through practice, Q1 was tricky for all of us but we settled into the groove.”

“Generally the Mercedes-powered cars can turn up the performance a bit. Even the Williams were also a lot closer than they were in practice. I want to thank the team and I think we should have a good car in the race,”concluded the Ferrari driver.