Was steering failure cause of Alonso test crash? 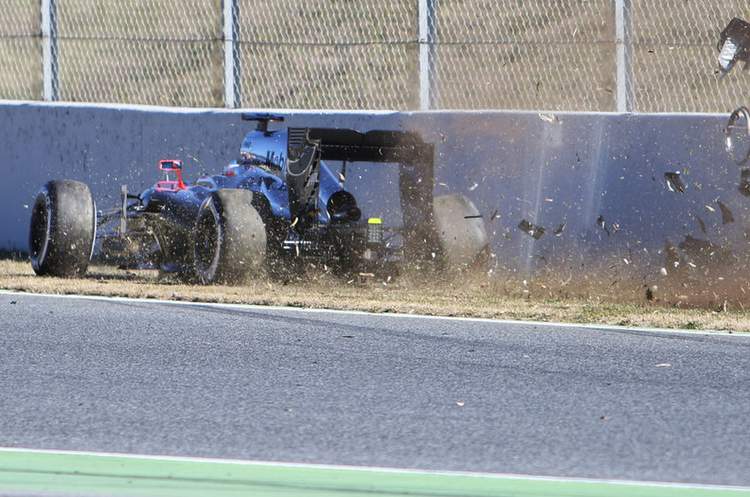 The cause of Fernando Alonso’s mysterious crash during Barcelona testing may now be clearer, as it emerges that the Spaniard felt a heaviness in the steering seconds before the incident.

Until now, McLaren-Honda has insisted the incident that sidelined its star driver for more than a month was not due to a technical failure.

Indeed, as recently as Monday, the British team said an exhaustive investigation showed “nothing” abnormal in the telemetry or as a result of the “subsequent reconstructions and laboratory tests”.

Also until now, Alonso has seemingly had no recollection of the crash, having reportedly even lost twenty years of memories in the immediate aftermath.

But McLaren revealed on Monday: “Fernando recalls a sense of ‘heavy’ steering prior to the accident.”

Marca, a leading Spanish sports daily, said it is the “first explanation” made by McLaren since the crash with “credibility”, amid wild media speculation about electric shock or a pre-existing medical condition that rendered Alonso unconscious.

The newspaper added that the new detail matches data that depicts Alonso steering to the right before hitting the wall “for no apparent reason”.

The hypothesis floated by Marca is that Alonso did indeed have a steering problem before the crash.

It published two photos of the MP4-30: one of Alonso just before he lost control, and another of Jenson Button exiting turn three at exactly the same part of the track.

While Button is holding the steering wheel almost exactly straight, Alonso is steering to the right.

And another photo, taken after Alonso has hit the wall and come to a stop, shows the Spaniard’s steering wheel in almost exactly the same position, indicating the car’s steering might have ‘locked’.

Team boss Eric Boullier recently admitted he has some understanding of why so much speculation has surrounded the mysterious Alonso crash.

“I understand,” he told El Pais newspaper, “but only in part.

“The problem was that the whole thing was on the emotional side. I understand, but some people used the situation incorrectly.

“You know better than I the role Alonso has in Spain,” Boullier told the Spanish journalist, “so it created the opportunity to invent information.”

Arguably another part of the problem, however, was McLaren’s communications strategy, and a series of contradictions made by team supremo Ron Dennis.

“I’m not here to defend Ron,” said Boullier, “but I have often seen misunderstandings because of a bad translation.

“What he said in (the) Barcelona (press conference) was that examinations of the car did not find anything strange. But that’s not against Fernando and for McLaren — we did everything together.

“I know it’s hard to understand, but we still do not know why he crashed. I promise you we are not hiding anything,” the Frenchman insisted.

Marca said Alonso is scheduled to arrive in Malaysia on Tuesday.