On the eve of the second Barcelona Formula 1 test, Pirelli look back on the first of the two tests at Circuit de Catalunya last week.

Paul Hembery, Pirelli motorsport director summed up, “Once again in Barcelona, as was the case at the first test in Jerez, we had quite cool weather and a sprinkling of rain, but the teams were still able to get through a considerable testing distance, with all the compounds apart from the full wet tried out, although there was very little significant running on the intermediate.”

“Montmeló is well known as a technical and wide-ranging circuit, which makes it an ideal test venue to investigate every aspect of tyre behaviour. It’s still too early to draw too many conclusions about the year ahead, but the lap times already indicate that the cars are even faster this year, with many of the testing times comfortably inside last year’s pole position.”

“The teams were able to work through quite a varied programme, including pit stop procedure, in order to acquaint themselves with the characteristics of the 2015 Pirelli range, and match them to their new cars. This work will continue during the next test in Barcelona, which takes place from next Thursday onwards, and is the final opportunity for the teams to prepare their cars before the first grand prix of the season.”

“At this time, we’re also pleased to announce that as was the case last year, Pirelli will be the Title Sponsor of the Formula 1 Gran Premio de España in May, and the Formula 1 Magyar Nagydíj 2015 in July,” concluded Hembery.

In addition to the usual 2015 tyre range, teams were also able to try out a prototype medium at Barcelona, which is being assessed by Pirelli for development purposes. Any teams that had not used their allocation of ‘winter hard’ prototypes at Jerez were also allowed to carry them over to Barcelona.

Each team is allocated a total of 110 sets of tyres for testing purposes throughout 2015; down from 135 sets last year.

After four days of testing a total of 3134 laps were covered, with the performance gains in evidence compared to last year’s Spanish Grand Prix pole time of 1m25.232s. This year’s Pirelli tyres feature a new rear construction, which distributes temperature more evenly and also contributes to a reduction in lap time. 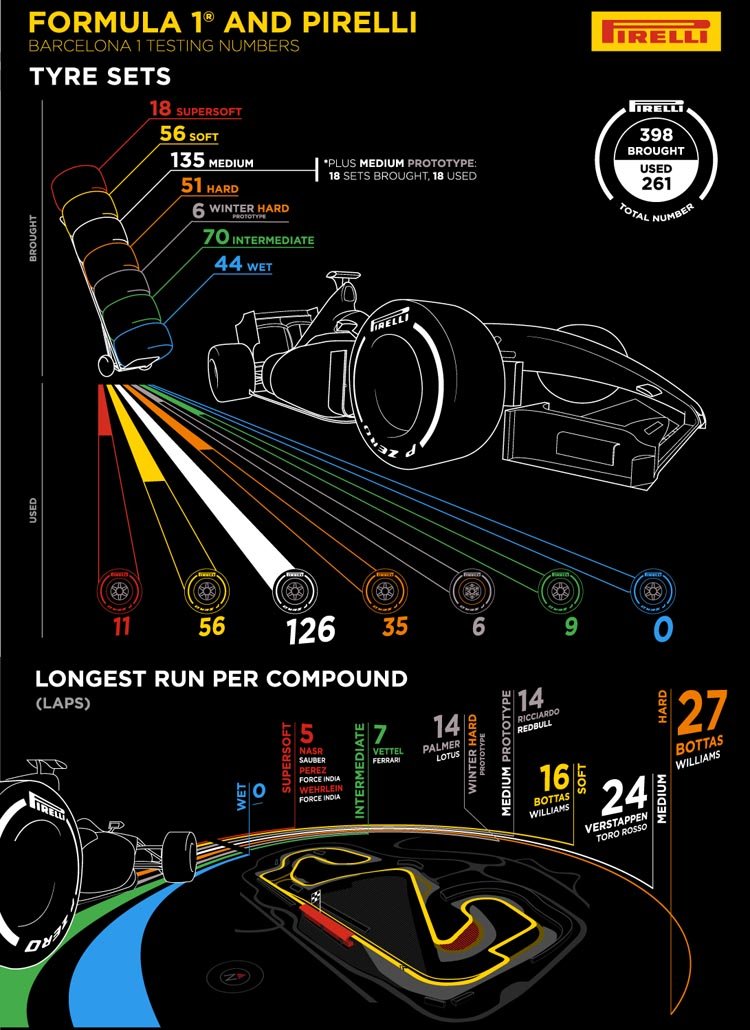