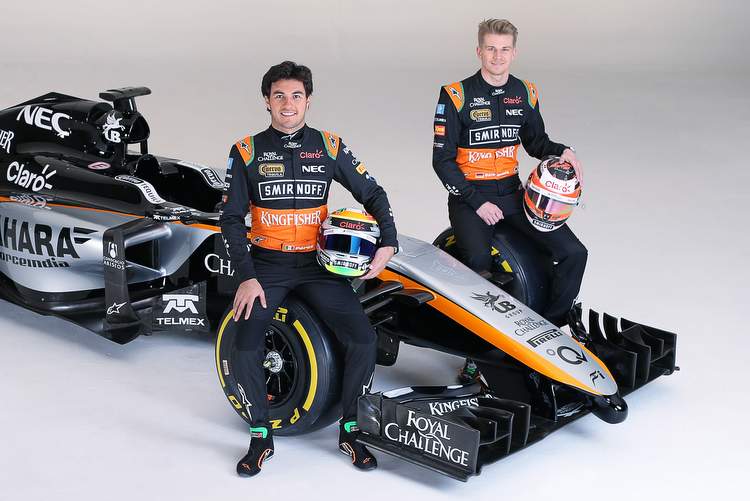 The absent-in-Jerez Force India team, along with drivers Nico Hulkenberg and Sergio Perez along with Pascal Wehrlein, are busily setting up in Barcelona for this week’s second pre-season test.

As earlier reported, despite rumours of financial and supplier trouble, the Silverstone based outfit is conspicuously among its eight other peers at Circuit de Catalunya.

Missing, however, is the team’s 2015 car, the as-yet-unseen VJM08, amid reports it is engine supplier Mercedes’ reserve driver Wehrlein who will begin the running in last year’s VJM07 on Thursday.

Force India, however, has rejected any suggestion racers Hulkenberg and Perez will defer all week to German Wehrlein, insisting the duo will be in action in Spain.

Indeed, sources report that while Wehrlein will drive on Thursday and Sunday, Mexican Perez and German Hulkenberg will be at the wheel of the VJM07 on Friday and Saturday respectively.

And hot on the heels of the Wehrlein reports, Vijay Mallya denied that Force India added silver to its car livery for 2015 due to forging closer ties to Mercedes.

“We always had a colour scheme based on white, incorporating the colours of the Indian flag,” the former billionaire told Spanish-language Fast-Mag.

“But we decided we wanted something more aggressive, so we changed our base from white to black. We added the silver because it looks more elegant,” he explained.

Mallya denied the silver has anything to do with Mercedes, “Yes, we use their engine, but it has nothing to do with the Silver Arrows, although some people have said that. Hopefully we will get some victories like them!”

The VJM08’s delay, however, is far from ideal preparation for the 2015 season, although the most serious rumours of financial trouble have been denied.

Omnicorse, for instance, claims that sources are reporting that all 300 employees have now been paid their due salaries for January and February. And after skipping Jerez, the team is now fully focused on Barcelona.