Tech Talk: What gave Mercedes the edge in Spain?

The all conquering Mercedes WO5 continued its streak with victory at the Spanish Grand Prix, the Silver Arrows giving its drivers Lewis Hamilton and Nico Rosberg almost a second’s advantage on their closest rivals – tech guru Matthew Somerfield analyses exactly what gave them the edge in Barcelona;

The team with the target on their back are still pushing hard, as long as the updates they bring correlate with the data from CFD/Wind tunnel the gap to the rest will be retained. For Barcelona Mercedes arrived with a new front wing.

1. The outer Endplate canards have been reshaped, with a curvature now apparent along their width. The canards create  pressure gradients mid way along the endplates that helps to draw the airflow from inside of the endplates outward and around the front tyre. The acute angle of the canards will also roll the pressure into  vortexes, energizing the flow.

2. Added for this race another smaller canard can be found inside the endplate. This canard is much flatter and used to control how and where the pressure moves both outbound and up and over the front tyre.

3. Previous iterations of the wing have seen the slots that divide each section of the wing terminating at the arch. This wing however sees the slots extended to the endplate, these changes are inline with the canard changes above. The extra slot length is needed in order to facilitate the extra airflow that the outer canard is trying to pull around the front tyre. Without the extra slot length of each wings tier the airflow inbound (across the flaps) could be disturbed, reducing downforce and making delivery inconsistent (stall).

4. The Cascade has seen some small amendments with the inner mounting stalk reduced in thickness. This is to reduce its impact on the wing planes aft of it.

5. The lower element of the cascade is now also slightly arced at the inner point.

6. The 3rd tier of the Mainplane has another slot added taking the wing to a 6 tier rather than 5.

7. The extension of the slots (3) means that the wing may flex under load more easily, this has led the team to use titanium vortex generators ahead of the rearward Strakes, increasing rigidity. This is important not only because it allows for a more consistent flow to the rearward strakes but retains the gap between the element, making it more difficult for tyre rubber to build up between them.

Mercedes have extended the sidepods length in order to both smooth the transition in and around the coke bottle and to dispatch of the slower moving hot air into a less crucial flow path.

Previously the hot exits terminated just ahead of the rear suspension (green) but the new exits (yellow) follow a similar design ethos to their closest rivals: Red Bull terminating much further back alongside the gearbox.

The interior airflow from the sidepod is not only hot but is less energised (having been worked, passing by all the components housed in the sidepod) and so where this airflow is released becomes crucial as it acts on the exterior airflow. 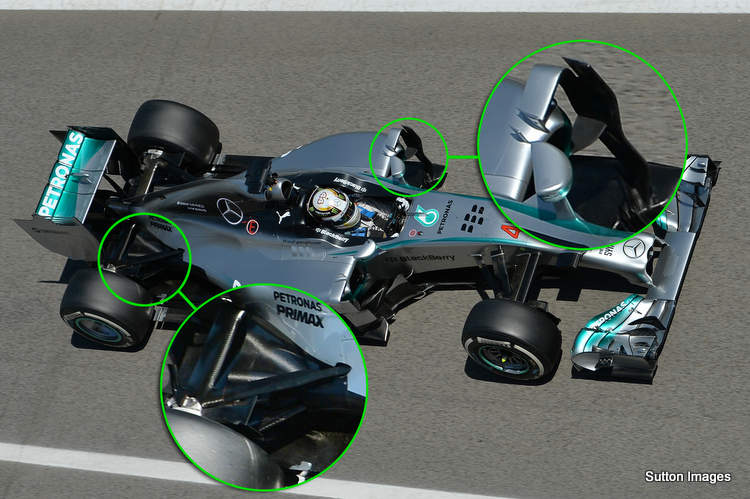 The new section of bodywork is raised and extremely sculpted allowing the maximum amount of air to still pass around the coke bottle region, further maximising the diffuser’s performance.

The team have also added a horizontal blade connecting the vertical airflow conditioner (see upper inset) with the sidepod around halfway up the front corner of the sidepod, which may just help tidy up / condition the airflow as it makes its way around the sidepod’s undercut. (Analysis by Matthew Somerfield)