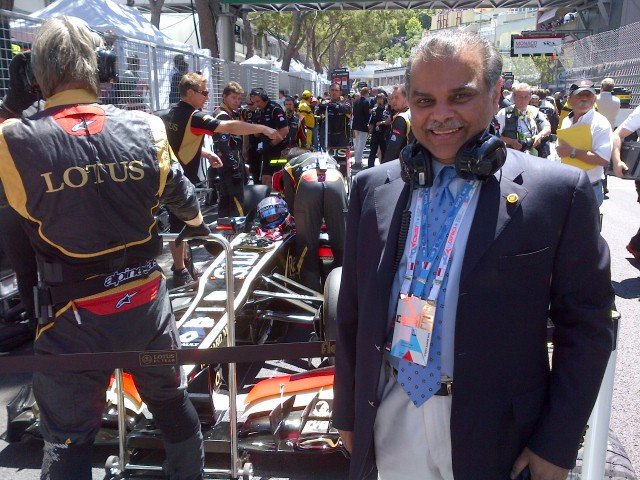 Lotus owner Gerard Lopez has declared that the deal with Mansoor Ijaz’s Quantum Motorsport consortium has been cancelled as funds were “never forthcoming“, while confirming that the Ijaz is “not an owner of the team.”

The Quantum deal, which grabbed headlines last year, never materialised despite Lotus’ insistence – until recently – that it was a done deal.

Lopez has now confirmed, “The Quantum money never arrived. We have now killed the talks. For 2014, our budget is complete with our new sponsor PDVSA.”

However, on the www.mansoorijaz.com website, there is still a claim that Ijaz is “an owner of the Lotus F1 Formula 1 team.”

But Ijaz contacted Grand Prix 247 by email, denying that the www.mansoorijaz.com website is his, adding it “has never been edited by myself or anyone associated with me.” Full transcript of this email here>>>

Upon contacting Genii regarding clarification of ownership of the Lotus F1 team, Grand Prix 247 received the following response, “We can confirm that the ownership of Lotus F1 Team limited remains unchanged and that Mr. Mansoor Ijaz is not an owner of Lotus F1 Team Limited, considering [that] the Quantum Motorsports Limited transaction has [been] not completed.”

Meanwhile Lopez has moved to end fears and ongoing speculation that the Enstone based Formula 1 team is on the verge of collapse, as recently the FIA issued an official F1 2014 entry list with Lotus marked with a conspicuous asterisk, sparking reports of financial doom.

“We just had the wrong team name on the list – namely the one of two years ago,” Lopez told Auto Motor und Sport on Wednesday. “I can assure you – everything is still the same.”

With regards to the team’s nine figure debt Lopez explained, Lopez told AM&S, “We have around €137 million of debt, of which more than €90 million debt is with ourselves [Genii]. Why would we demand the repayment of these [internal] debts? That makes no sense. We reconciled the money as marketing expenses. At the moment, it is important that the team goes forward.”

Despite the reassurance many still question if the now-terminally delayed and ultimately aborted Quantum buy-in has derailed Lotus ahead of the new season, who have turned to the lucratively-backed Venezuelan Pastor Maldonado to replace unpaid Finn Kimi Raikkonen.

Lopez insists that Raikkonen has now been “partly paid”. “He will get the rest,” he added.

Davide Valsecchi, the team’s 2103 reserve driver, revealed recently, “According to my contract my salary was like that of a waiter.  [Lotus] haven’t paid me yet. I’m sure that as soon as they’ll be in a position to do so, they’ll solve their debt.”

But Lotus is also sitting out the forthcoming Jerez test, where every other team is expected to put the newly V6-powered single seaters through their paces for the first time. Like the entry list, Lotus’ absence will be conspicuous.

“We are very satisfied with the development of our car,” Lopez said, “which will perhaps look a bit different from the others. We believe it is better to use the next few weeks in the wind tunnel, which will give us more than one test on the track would.”

He insists that missing the Jerez test will not give Lotus’ rivals a head-start when it comes to understanding the new turbo ‘power unit’.

“There is also Red Bull, Toro Rosso and Caterham testing (the Renault engine), and the findings will also benefit us,” said Lopez.

“Any changes that Renault makes before the Bahrain test will also be in our car,” he explained. “The first real test is in Bahrain. Before that, we can find more laptime in the factory.”

But, actually, Lotus or Renault never officially announced a new deal for 2014. Does the team even have an engine for 2014?

“We have the Renault engine,” Lopez insisted, “but Lotus is not just a customer of Renault. Our engineers, for example, have helped develop the KERS. So we have tried to agree that it is more than just an engine deal, which has delayed the negotiations somewhat.”

Finally, Lopez played down reports of a link with the Italian marque De Tomaso.

“There is currently nothing to it,” he said, but he did admit that he is looking into developing a carbon sports car, “De Tomaso is an option, but this has nothing to do with Formula 1.”