Australian Grand Prix: Raikkonen knows what he is doing 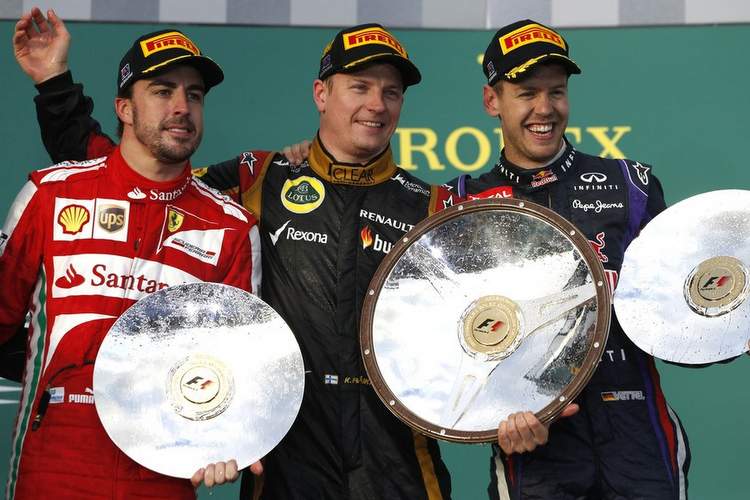 Kimi Raikkonen won the season-opening Australian Grand Prix as he powered to his 20th career Formula 1 victory, and gave Lotus a perfect start to the new season and dispelling early fears that world champions Red Bull were on the verge dominating proceedings after locking out the front row in qualifying a few hours earlier.

It was also a solid start for Ferrari as Fernando Alonso finished second, with teammate Felipe Massa fourth. Splitting the reds was Sebastian Vettel, who started from pole thanks to great speed in the Red Bull RB9 but in race trim, the car appears to have met its match in the Ferrari and Lotus.

Raikkonen and Lotus maximised the fact that their E21 is kinder than most on the new generation Pirelli tyres, and claimed the Enstone based team’s third victory at the Albert Park circuit.

Starting from seventh on the grid, Raikkonen made a two-stop strategy work for him, while his rivals went for a three-stop option. The Iceman kept his cool under skies that occasionally spat raindrops, taking the lead on lap 24 from where he comfortably controlled the race.

Late on Alonso attacked, but Raikkonen had plenty to spare and upped his pace accordingly to take the chequered flag, to top an all-world champion podium in Melbourne.

Raikkonen said afterwards, “I was confident that the tyres would be OK. I had a very good car all weekend even though I didn’t do any long runs in the winter. You just have to get through the early laps in the first race of the season. Near the end, I was still pushing because I knew Fernando was catching up a bit and I thought at some point we would need a little extra if the rain came again.”

Alonso started fifth and in the end was happy with second place, no doubt remembering the woeful situation that befell the team a year ago, same place, same time.

The Spaniard was involved in an early (no team orders) tussle with teammate Massa, but by pitting early for the second batch of tyre stops he managed to leapfrog not only Massa but also Vettel. Thereafter he had a stab at Raikkonen’s lead late on in the race, but thought better of the pursuit when Raikkonen responded with a quicker lap.

Alonso reflected, “It was a fantastic race for us, fighting all through the race. A big thanks to the fans all weekend, we felt sad yesterday when we postponed qualifying because the fans were there in the grandstands in the rain. Today we had to put a good show for everyone and I think we did it. The race had action every lap. I personally enjoyed it. At the end, I was sad not to be able to win the race, but Kimi was fantastic and we need to congratulate them for a fantastic race.”

“We had a difficult start of season two years ago and last year, too, and this year is very different. We feel much more comfortable, the car is responding well and we have a good season ahead of us. We only have five days to prepare for the next race but we will again be a tough opponent,” added the Ferrari driver.

The world champions looked fighting fit after Sunday’s postponed qualifying with Vettel taking pole and Mark Webber next best and locking out the front row. But as has become his custom on home soil Webber messed up the start, and was thereafter never a top three contender, eventually finishing sixth.

Vettel got away well but soon it was evident that the Red Bull RB9 had hot lap pace, but it was not kind to it’s tyres and consequently the number one was the first of the front-runners to pit. Thereafter the German was on the back foot and was actually quite chuffed to be on the podium, which suggests that he felt he did a good job with what he had at his disposal.

Vettel summed up his day, “We can be happy but we wanted more – when you start from pole you expect to win. The first few laps were OK but then the tyres started to fall apart. Lotus and Ferrari had incredible pace and we were third quickest. Best wishes to Kimi – we have to admit sometimes that other people are faster than us but it’s a long season so we have some good points to start with and we have no reason to be disappointed.”

Massa was fourth after an action-packed race where he gave a good account of himself, at times even quicker than Alonso. Ferrari leave Melbourne topping the constructor’s table.

In retrospect, Lewis Hamilton will be pleased with his first Grand Prix with Mercedes. He qualified third and then was involved in numerous skirmishes throughout the course of the race. Giving it all he could in a car that is still off the top three and which flattered in testing only to disappoint when it mattered most.

Nevertheless, fifth is a good points haul when compared to his teammate Nico Rosberg who retired with a mechanical issue. There is still plenty work to do for the Silver Arrows, but whatever the case they are assured in Hamilton a driver who will extract everything possible from whatever they give him – the message clear in Melbourne.

Hamilton said, “We didn’t expect to have such a competitive car. Some people will be like, ‘Oh, it wasn’t great’ but I think fifth’s good. I had to come in and changes tyres and 27 laps on that tyre [wasn’t possible], so we had to covert to a three-stop strategy. I think we’ll have a good race in Malaysia.”

‘Man of the Match’ must go to Adrian Sutil who made his return to the Force India cockpit after a year on the sidelines. He led twice and was in among the top runners throughout the race as he did his first two stints on the harder tyres and was looking at a podium finish or top five at least.

But when he bolted on the red band softs with ten laps to run it was free fall until the flag dropped with seventh place a reward for an impressive effort that signalled his return to the top tier of the sport in fine style.

“It was good to see and important to send a message to the team to wake up again to know why we are here. You never know when there is an opportunity, but we need to be ready for it. I was just concentrating and knew it would be difficult. On the soft tyre it was hard because I lost so much performance, then the pace came back again at the end. It’s good for me to see that I’m still fast and that I’m an F1 driver again. You never expect to be in first [place] after 10-15 laps after a break from the sport,” mused Sutil.

His teammate Paul di Resta was eighth and crossed the finish line with his teammate in his sights.

Biggest disappointment of the weekend was the ‘no show’ by McLaren. A year earlier they were top of the pile with Jenson Button winning the race after he and Hamilton had locked out the front row in qualifying.

Fast forward 12 months and the story was all different as Button struggled all day on his way to ninth and new boy Sergio Perez toiled hard to finish 11th – last year he was eighth in a Sauber.

Button spoke of his afternoon at work, “The start was pretty good and I got past a Lotus, I think. I thought we were doing three laps [on the tyres] but then the temperatures went through the roof. We thought we were doing the right thing but obviously not. There’s still a lot of work to do. I don’t think you’ll see a massive difference [in Malaysia] no. Maybe that circuit will suit us better. It’s going to be a long night of debriefing for us.”

Claiming the final point on offer was Romain Grosjean who shared the fourth row with his victorious teammate, but was simply outclassed and never really a factor in the race. Close study of the start suggests that his E21 was tagged and damaged as the field made their way through the first few turns, which may explain the difference in performance compared to Raikkonen.

It was a heartache for Sauber and Nico Hulkenberg as he failed to make the grid due to a fuel system issue which forced the Swiss squad to withdraw their German driver on grounds of safety.

Williams also endured a torrid three days and will leave Melbourne as the underachievers of the weekend, although Valterri Bottas did end up best of the rookies in 14th he was battling down with the Toro Rosso pair and Esteban Gutierrez in the Sauber.

Pastor Maldonado’s weekend ended when he beached the FW35 which he claimed was undrivable.

In the battle of the minnows Marussia got the upper hand with Jules Bianchi shining on his debut for the team, on his way to 15th.

Now there is hardly a moment to spare as teams fly off to Malaysia for round two next weekend.

The final word goes to the winning team boss Eric Boullier: “We’re most delighted – it was the best start we could have had to the season. Not only is it a win, but the strategy we chose also worked. Reduced tyre wear was one of the strengths of the car that we inherited from last season and it was useful because during Kimi’s second stint the other cars were starting to challenge a bit more.”