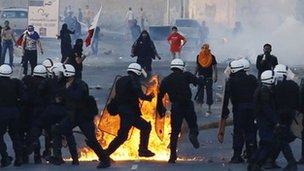 Sunday's unrest focused in the village of Sitra, south of Manama (Photo: BBC)

Jan.5 (GMM) More civil unrest in Bahrain this past weekend will intensify speculation the island Kingdom’s return to the Formula 1 calendar early this year will be called off again.

Last year’s pre-season test and also the grand prix at the same Sakhir circuit were cancelled due to a political uprising, in which the government was later found to have used excessive force against its people.

“We have been assured that this is not what’s happening,” said F1 chief executive Bernie Ecclestone to the Guardian newspaper last month.

“What did the report say? Yes, there were instances or whatever, but … I wanted to go out there. I was happy to go. I’d like to go into the prison or the hospital or whatever and ask What actually happened?” he said.

“I hope we go to Bahrain (in 2012) and there’s no trouble — the race goes on, the public are happy and there are no dramas. That’s what I hope,” added Ecclestone.

Those hopes might now have been dented, amid reports a Bahraini woman was killed after inhaling tear gas fired during a “peaceful” demonstration this week near the capital Manama.

It is the third fatality since late November last year, with one teenager reportedly dying after a tear gas canister hit him on the head in late December and another run over by a police vehicle a month earlier.

Ecclestone was asked last month if he would consider calling off the 2012 race if there was real proof that Bahrain’s problems were persisting.

“We’d have to give it some serious thought then. But we’ve been to Argentina when there’s been big dramas. There’s been dramas in Brazil.

“I think you can look anywhere now and it’s not all good.”

Ecclestone told Al Jazeera in December: “There obviously is a problem and I’m quite sure that eventually they’ll get to the bottom of it and sort it out.”

The Bahrain grand prix is scheduled to be the fourth of 20 races in 2012.